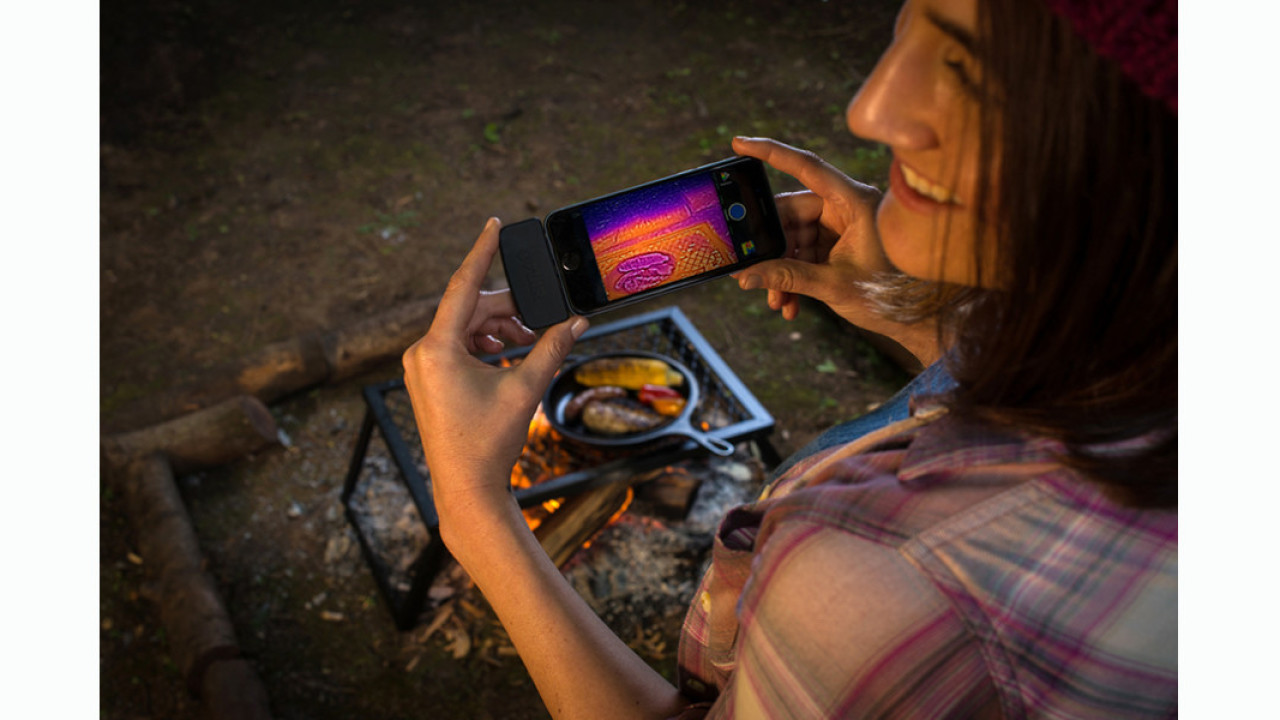 Flir One, a thermal imaging camera attachment to your iPhone or Android smartphone, is designed to let you peer deep into impenetrable places like walls and through the pitch black darkness of night. For this utilitarian purpose alone, contractors, sportspeople and homeowners will likely put the $250 Flir to work in more ways than they would have imagined.

While this device won’t let you see through walls, it detects and lets you visualize the heat of objects behind them via its Flir One Companion app. That app’s  psychedelic color schemes have also caught the attention of visual artists, some (not all) of whom would not know a dry wall from a circuit board. Creative folks are crafting Flir’s unique visions into vibrant artworks.

I had a look at the second-generation Flir One in both homeowner and artist mode and found it was equally able to detect a potential clogged drain (and make it look as pretty as a drain could look) as heat escaping through my windows, while at the same time producing extremely decorative images of whatever I would normally photograph, though at 640 x 480 resolution.

The new second generation Flir has a much different form factor and includes a more powerful thermal sensor than the original camera, with four times the resolution for crisper and clearer images. As a detachable accessory that fits into the lightening or microUSB connector of your mobile device, it is also lighter — less than one-third the weight of the original — at 2.75 ounces.

The human eye can see only a small part of the electromagnetic spectrum. Flir’s cameras, on the other hand — like the Seek Thermal and Fluke cameras — can see into the infrared spectrum, which is comprised of longer wavelengths than visible light. And that is what allows the device’s camera to see heat in the same way as humans see light, and show you the results.

Flir’s dime-sized Lepton camera, with its long-wave infrared sensor, converts heat into color images, allows us to see even fine gradations in temperature, which may be critical in detecting leaks, seeing prowlers or finding a lost pet in the darkness — even through fog and smoke. It detects temperature differences as small as 0.18 degrees F (0.1 degrees C).

Flir One employs both a standard camera and a thermal camera. Its technology is designed to emboss a visible image onto the thermal image without eliminating thermal information — while enhancing the resolution and detail of the image.

MSX blending technology adds visible spectrum detail to thermal images and enhances resolution. It is designed to dramatically increase your ability to interpret a thermal image in real-world environments by adding visible edge detail to it.

Flir One works off of its own battery and does not drain the one in your device. When inactive, FLIR automatically switches to low-power mode to maximize battery life. I found a fully charged battery worked for several days on and off without a recharge.

The Lightning connector is reversible, so iOS users can plug the unit into their device facing either forward or backward, depending on what you want to see.

The hardware works in conjunction with the free Flir One app for iOS and Android which has an intuitive interface and a variety of functions that let you capture, save, and share its images both for utilitarian and entertainment value.

As the official companion app for the device, you will need to have it launched in order to see the thermal images. Artists will revel in nine color palettes, including Iron, Gray, Rainbow, Contrast, Arctic, Lava, Wheel, Coldest, Hottest. Features include Panorama, TimeLapse and CloseUp.

There are several other apps you can also use with the Flir One, as the company’s SDK allows third-party apps to take advantage of the thermal sensor. Flir’s own Flir Tools, a cross-platform app available both for desktop and mobile, lets you view images taken with the thermal camera and apply various parameters to compile analyses and reports or to zoom in for close-ups and different views of the images.

Because Flir is an attachment that fits onto your device body, the most obvious downside is that not all covers will allow the device a proper fit.

Tapping on the screen flips the image rather than enlarges it. Also the software does not allow the iPhone volume to act as a shutter, forcing you to use the on-screen button.

If you’re going to use Flir for artistic imaging, it would be nice if the software made it easy to remove the Flir watermark from your images.

Flir One Second Generation is a valuable tool for checking potential problems at home and can detect very small gradations in temperature. It was able to identify hot spots around my refrigerator and windows while giving me the thumbs up on my circuit breaker and plumbing.

The improved camera can give an artistic look to images, regardless of whether they were taken for home improvement or recreation.

Flir One is available for $249.99. All companion apps, except for Zombie Vision, are free.