Flir Systems, makers of the recently released Flir One thermal camera accessory for the iPhone 5 and 5s, has launched the Flir Thermal Imaging Developer Program to assist programmers in creating apps for the product.

Flir One is an infrared camera that attaches to the back of your iPhone 5 or 5S. When you use it with its companion app, it translates thermal energy into real time color images that will let you identify obstacles and danger spots in the dark. 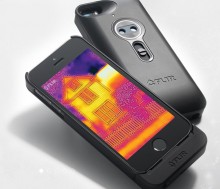 The program supports programmers who want to design apps for both “practical and innovative uses” for the Flir One. It includes access to the Flir One SDK and technical support from product experts.

Licensed SDK users will have private access to the Flir One SDK itself, the developers guide, sample code, and technical support. Programmers can capture and use both thermal and visible output from the Flir One—including images and video streams—in their applications.

The new program is open now and it’s free to sign up. Registered members receive software tools, ongoing technical support, membership in the Flir One Developer Forum, and other resources.

Flir already has some creative variations on the theme in the App Store such as Flir One Timelapse, Panorama and Paint. The company now seeks even more apps to support and broaden the Flir platform.