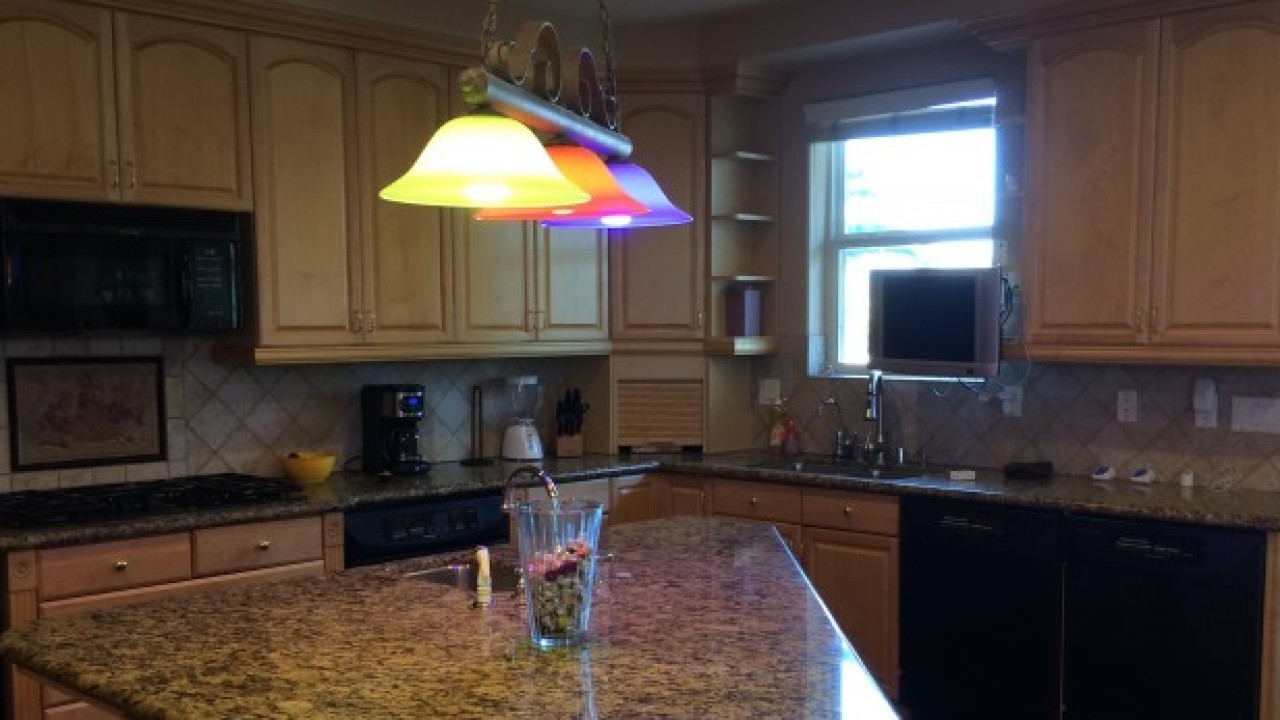 At CES this year, connected home startup SmartThings outfitted a house with a full range of smart appliances to show off the full possibilities of its platform. SmartThings COO Andrew Brooks took us on a walkthrough to show us what it’s all about.

The company makes a hub that integrates with its own line of sensors and a wide array of third-party devices. Following the launch of an app redesign last December, SmartThings refocused its setup to act as a “conversation with your home.”

Brooks demonstrated using the hub to switch into “Good Morning” mode through a Jawbone UP24 and automatically turning on the news as soon as you open your cupboards.

He also showed off possible security measures in a connected home, like using a Sonos to mimic a dog barking or broadcast an alarm.

Throughout the house, you’ll find a variety of smart locks, outlets, cameras, sensors and lights. It also includes an Ubi voice-controlled computer and Centralite’s Pearl Thermostat.

Brooks declined to provide specifics on how much a dream setup like the one they have at CES would cost, but he did offer up some figures for his own home. According to him, outfitting his house with several locks, contact sensors, motion sensors, a thermostat, smart outlets and a few security features cost him roughly $1,500. He also noted that you could put together a basic SmartThings setup with a hub, smartlock and sensors for less than $500.

Consumers that already own devices like Sonos, Philips Hue or Nest can also see immediate benefits from adding in a hub like SmartThings or Revolv.

The connected home has been a major theme at CES 2014, but the truth is that just simply connecting all your household appliances has pretty limited utility. The real value lies in making your setup automated and intelligent so that it anticipates your needs and warns you when things are out of the ordinary.

Brooks, for his part, believes that the next step for the smart home is less about devices and more about interfaces:

“A lot of people spend time thinking about what the next connected devices will be. I think the next big shift will be what are the interfaces with which you interact with your smart home,” he said.

SmartThings’s goal is to control our devices via new interaction mechanisms like voice, gestures and presence so that the hub feels like another member of the family.

Tying together two hot topics, Brooks highlighted the possibilities for wearables like fitness bracelets and smartwatches to augment the connected home simply by opening up their APIs and allowing other platforms to take advantage of their sensors and gestures.

“The wearables market will increasingly be thinking, ‘If we expose these events and capabilities, what is the benefit that can be seen across other touch points?’” he added.

In order to further extend its platform, SmartThings is announcing a new Labs program that will add thirty-party integrations from partners like Philips Hue, Sonos, and Belkin to its app.

We’re genuinely excited about the wide selection of connected home products that have arrived on the market already, and we see loads of potential in the upcoming devices we’re seeing at CES. Most of us won’t have need for the full range of appliances that SmartThings is showing off at its model home, but it’s definitely interesting to see how deep this rabbit hole goes.

Related: Revolv review: An affordable smart home hub with one app to rule them all