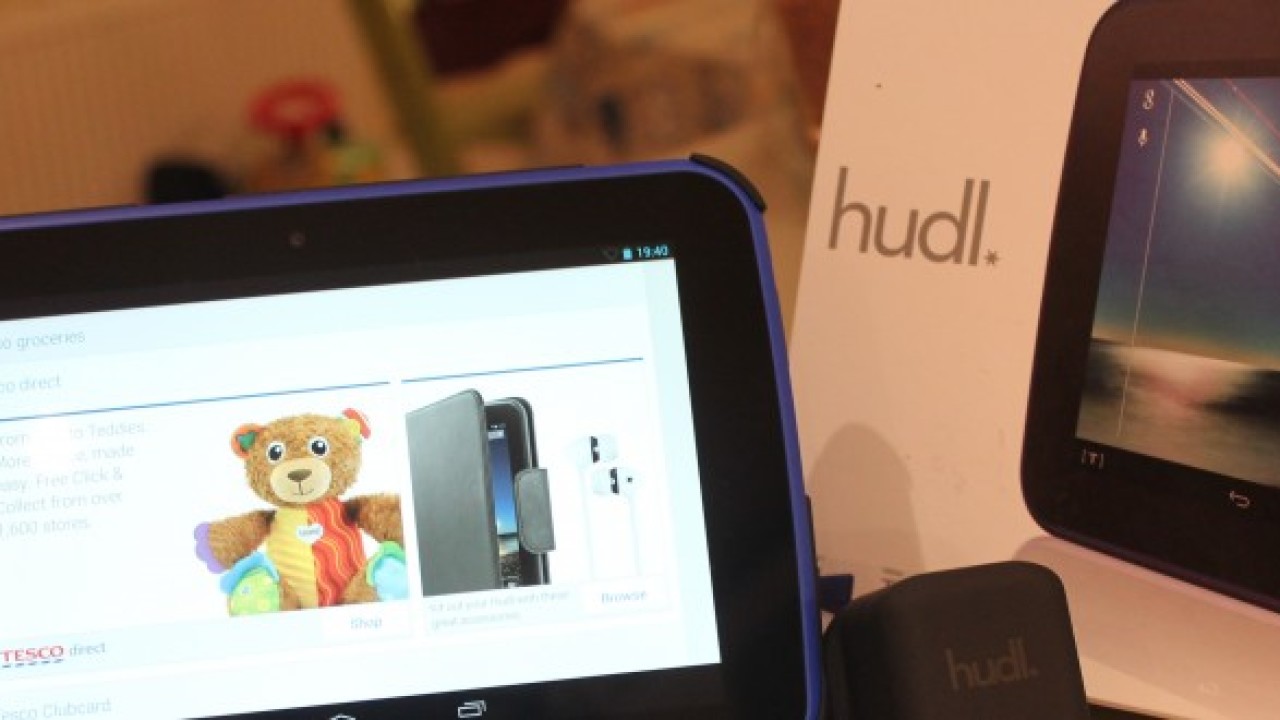 When a major supermarket chain announces plans to enter the tablet space, one’s natural instinct is to run for the hills. Or, at the very least, dismiss it as crap before it’s even gone to market.

And with the likes of Google’s Nexus 7 and Samsung’s Galaxy Note 8.0 already serving the portable tablet industry well, is there really room for another entrant, one from a brand synonymous with bread, beans, and bananas?

Sure, Tesco has long transcended its grocery roots in the UK, offering everything from insurance to a mobile network. But getting into the hardware game where all the cool kids hang? Well, it’s a bold move for sure.

Our initial hands-on with the Hudl was largely positive, allaying concerns of yet another budget and inferior device entering the tablet fraternity. So we thought we’d get our hands on one of Tesco’s tasty tablets to give it a proper spin, and see whether it has what it takes to make tracks in the already-competitive tablet market.

Hudl: In the box

Available in black, blue, purple and red, Tesco’s Hudl ships in a compact box replete with a micro USB cable and a wall-charger.

Now, in a clear sign that Tesco isn’t cutting corners to keep costs down, the charger is fully-branded and feels rather unique – certainly not the typical mass-produced cheapo you might find for $0.99 (+$5.99 shipping) on eBay, and which may be thrown in as an added extra with some of the other lower-end tablets on the market.

Branded chargers, compact boxes and a choice of four colors are all very well and good, but what you really want to know about is what’s under the hood, right?

Manufactured by Taiwan’s Wistron Corporation, the Hudl delivers a reasonably impressive spec list, certainly for its £119 price-tag. The 7-inch (diagonal) IPS LCD screen features an adequate 1440 x 900 HD resolution (242 ppi), and all this is underpinned by 16GB of internal storage, a 1.5GHz A9 quad-core processor and 1GB of RAM.

Juxtapose this against the Nexus 7, and you start to get a flavor of the level of bang you’re getting for your Hudl buck.

Given the Nexus 7 will set you back £199, you could be forgiven for thinking that the extra £80 you’re paying is going on the aforementioned spec-enhancements, but the Hudl actually has a few tricks of its own up its sleeve. These come in the form of a micro-SD slot that lets you expand the storage up to 48GB in total and – drum roll – a Micro-HDMI slot. Yes, you can hook your Hudl up to your TV and watch movies stored on your device, or stream from Tesco-owned Blinkbox, Google Play or any other similar service.

This is actually a very deliberate move on Tesco’s behalf – it’s trying to appeal to the general populace, and through bypassing the need to stream through other third-party boxes, it has made it easier for its tablet to become a feature in livingrooms across the nation.

It’s also worth mentioning the 16GB Kindle Fire HD here, which actually costs the same as the Hudl through Tesco. There are comparisons to be made for sure, but given Amazon’s reliance on its own app ecosystem, and it doesn’t serve up access to the likes of Google Maps and the Gmail app, it feels more natural to compare the Hudl with the Nexus 7.

The first thing you’ll notice when you pull the Hudl out the box is that it’s a very solid device – it doesn’t feel like a £119 tablet.

The extra 80g it has on the Nexus 7 is certainly noticeable, but given we’re talking such small units of measurement here, it’s not exactly a deal-breaker. You can easily slip the Hudl in a (large) inside pocket, or backpack and it will serve you well throughout the day.

The back of the Hudl is nice to the touch, sporting a soft, velvety plastic casing with the rear-facing camera in the top-right, and two 1w stereo speakers.

The sound quality from the speakers isn’t brilliant – it’s certainly passable – but not brilliant. Indeed, if you have a low tolerance threshold for tinny sound, then a good set of headphones or speakers will obviously bypass this. And given the price of the Hudl, there was always going to be some shortcomings.

The Hudl was evidently designed to work in landscape mode, given the positioning of the cameras and so on. And along the top edge is the micro-HDMI port, microphone and headphone jack, while on the bottom rim is the micro-USB port. Down the right-hand side, is the slot for the micro-SD card, the volume and the on/off button.

When you’re setting the Hudl up for the first time, you do get a sense that Tesco is going for the family market. There is a leaning towards protecting children, with one of the first screens offering advice on how you can take precautions for those using the Web and apps unsupervised. This is entirely optional, of course.

If you do take the advice, it basically guides you to one of the many parental control apps on Google Play, and suggests creating individual user accounts and filtering content, among other features enabled by Google and Android.

If there was any doubt that the Hudl was a Tesco device, confirmation is served up via the permanent [T] button in the bottom menu section. Hitting this takes you directly to the supermarket giant’s online repository, where you can buy anything from vitamins and vodka, to TVs and teddy bears.

Through the side-menu here, you’ll see a series of shortcuts to Tesco products, including Blinkbox movies and music. These are basically shortcuts to its native Android apps – read our review of Blinkbox for Android from earlier this year – and mobile-optimized Web versions of the various services, including Tesco banking.

This is an obvious move from Tesco given its investment in these services, as it moves further away from groceries into entertainment and general lifestyle services.

The Hudl runs Android 4.2.2 (Jelly Bean) out of the box, and it’s pretty much the sans customized incarnation of the operating system, though Tesco has thrown its own flavor of vanilla into the mix.

As we’ve seen with the child-centric guides at the start, the Hudl is very much geared towards novice users, and seeks to help them optimize their use of the tablet.

There are various promotional Tesco widgets installed on the homescreen too, though these can be deleted easily by long-pressing and shifting toward the little cross icon that appears at the top.

…to getting the most from the installed camera. This includes snapping photos, editing and sharing.

The rest of the Hudl experience is pretty much as you’d expect from an Android tablet. It worked well for us in our tests, responded well to the touch and promises a long-battery life.

Indeed, Tesco promises ‘up to’ 9 hours of video playback from the Hudl, a figure that naturally varies on the playback conditions – screen brightness, video format, volume and so on.

I streamed an hour-long TV show on full-brightness, and there was more than 80% of the battery remaining. So in real terms, I’m sure the video playback would typically be closer to the 6 hour mark for most users, which is fine in itself. And obviously, if you’re just using it for browsing the Web, and checking the occasional email, there’s no reason why this couldn’t last you a few days in standby mode.

If you are shelling out for a Hudl, you’d also may as well go for the folding case/stand too, which comes in at a reasonable £15, less than half what a iPad mini smart cover costs.

There’s no question the Hudl offers a compelling proposition for those looking to enter the tablet market in the UK. For the price (£119), it certainly punches above its weight and offers more than enough for Tesco’s main target market here.

Granted, it’s not quite up to speed with something like the Nexus 7, but it’s in the same ball park, and given the strength and reach of Tesco’s brand, I can’t see any reason why the Hudl won’t become a mainstay in homes around the country.

Then there’s this. If you’re a regular Tesco customer anyway, it’s actually possible to get your hands on a Hudl for as little as £60, using the Tesco Clubcard Boost initiative, which essentially doubles the value of your loyalty vouchers at the checkout. After all, every little helps.