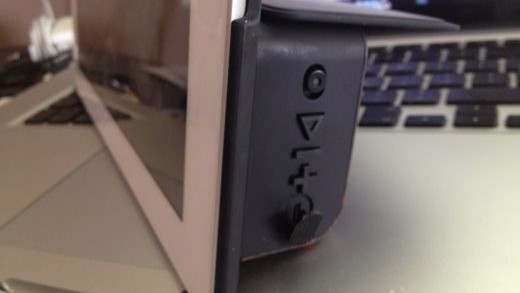 At just about every consumer electronics trade show you’ll attend, you’ll see a booth by a company called Ozaki. While the Chinese company hasn’t enjoyed the wild success that we see in the US and UK from others such as Griffin, iLounge and the rest, it’s a big enough name that its products are even copied by other Chinese counterfeiters. One of its latest releases, the O!music is a Bluetooth speaker system that stands apart from most of what we’ve seen, so it’s time to tell you about it.

First off, let’s talk about the physical side of things. It’s somewhat heavy, which is important because it’s made to mount to your iPad via a magnet on the included back cover. The back cover itself is rather nice, with a felted, rubberized feel to the outside and a velvet-like inner texture.

Across the back of the case (can we call it a case? It’s really just a back protector that works along with Apple’s own Smart Cover.) there’s a metal strip that serves as a mounting point for the speaker. Yes, it does indeed mount to your iPad. Interestingly, the company has spent a lot of time making sure that the mounted speaker actually makes the iPad easier to hold so it’s great for gaming.

The speaker itself sounds great. This is one area where Ozaki has consistently stood apart from the crowd. The company makes some of the most interesting iOS device accessories you’ll ever see, and they’re considerably higher quality than what we normally get coming across our desks. With a full charge you’ll get about 8 hours of Bluetooth listening, or around 20 hours if you’re connected via the included auxiliary input cable.

When detached, there’s a panel on the back that flips up and covers the magnet. The natural orientation for the device places the controls and charging port on the left side, if the speaker is facing you. However, if you want to attach it to your iPad and use the speaker as a stand (as intended) you’ll need to flip the device upside down. That puts the controls on the right side, with the volume up button at the bottom. In other words, not the greatest design choice but it doesn’t detract from the function, just the form.

I also wish that, with the speaker attached, it would angle back just slightly more than it does. While the current angle does allow for it to stand on its own without fear of your iPad falling on its face, my personal preference would be another 5 degrees or so in order to point it directly at my face when it’s sitting on my desk.

Now back to the good stuff. There’s something to be said for haptic feedback when you’re playing games, and even companies that specialize in the technology are focusing on integrating haptics with sound in order to make games and movies feel larger than life. The O!music’s interesting byproduct is, since you’re holding it, games feel more immersive because you pick up the vibration of the sound directly to your hands. Action and driving games are especially benefitted by this, but I’d venture to say that the effect will carry over to other genres as well.

At a street price of around $150 the O!music speaker isn’t a purchase to be taken lightly. But as we increasingly user our iPads for more media content its (admittedly admirable) integrated speaker is showing its weakness. If you’ve avoided using your iPad for watching movies, or you just want to beef up your sound, the O!music is the absolute best option we’ve seen thus far, and it’s another killer product from a company that you’ve probably never heard of.

You can find Ozaki products at the usual suspects, such as Amazon, Brookstone and others.