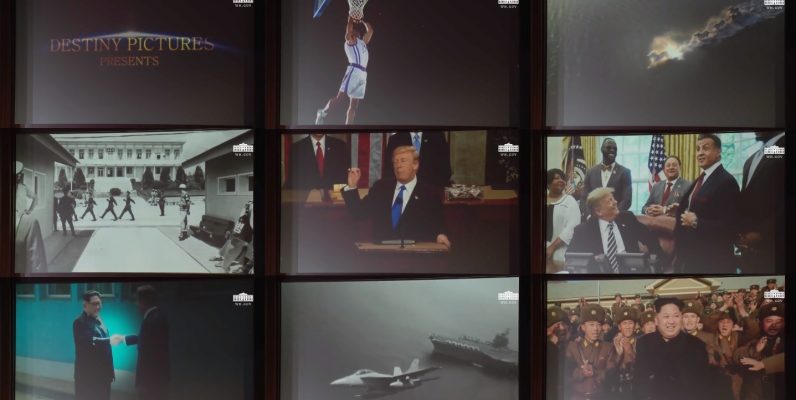 US president Donald Trump asked North Korean dictator Kim Jong Un to watch a video on an iPad yesterday, during a summit between the two leader’s nations in Singapore. The film, which was also shown to the media, depicts the two leaders as the protagonists in a four minute movie trailer where they’re asked to heroically break the cycles that have repeated throughout history.

It’s like the creators of “South Park” filmed a fake trailer for a comedic satire, but it’s real. You can watch the 4:12 trailer below.

And, just because the only logical reaction to seeing this is to say “this has to be a joke,” here’s the full video on the official White House YouTube page, the movie trailer begins at 39:25.

Update 4:30 CST 6/12/2018: As you can see the above link no longer works. Never fear, Donald Trump tweeted a link to the video, now hosted on Facebook.

Here is the video, “A Story of Opportunity” that I shared with Kim Jong-un at the #SingaporeSummit
➡️https://t.co/43oOci4jvo pic.twitter.com/xBKFkDLtj7

Honestly, it seems a tad bit romantic. Unlike the vitriol that Kim has for just about everyone except Dennis Rodman, and the outright disdain that Trump seems to sling at the leaders of democratic countries, there’s a hint of humanity and a definite olive branch of friendship in this film.

Watching the trailer with no volume immediately conjures visions of Stanley Kubrick’s “A Clockwork Orange” – especially when the aircraft carrier, jets, and ballistic missiles come out. But the voice over, done so over-the-top you’d expect it to intro a grindhouse film, is where this masterpiece of ridiculousness shines.

Destiny Pictures presents a story of opportunity. A new story, a new beginning. One of peace. Two men, two leaders, one destiny. A story about a special moment in time, when a man is presented with one chance which may never be repeated. What will he choose? To show vision and leadership? Or not?

And just to be clear here, nobody is trying to shoehorn a failed video presentation into a jokey film trailer analogy. Here’s the closing statement of the film:

Featuring President Donald Trump and Chairman Kim Jong Un…. in a meeting to remake history. To shine in the sun. One moment, one choice, what if? The future remains to be written.

The only thing missing is Eminem’s “Lose Yourself” from the “8 Mile” soundtrack – though the White House probably couldn’t secure the rights to it. Maybe Kid Rock could cover it. I digress.

The point is: the United States of America now conducts diplomacy with our G7 allies via threats of tariffs and sanctions, while simultaneously negotiating with murderous dictators by offering up Hollywood dreams, lucrative real estate deals, and basketball.

And that sends a clear message to the rest of the world: if you’re not willing to commit atrocities against your population and threaten the US with nuclear weapons, you won’t get the VIP treatment from former reality TV star Donald Trump.

Read next: Fortnite is coming to Nintendo Switch today