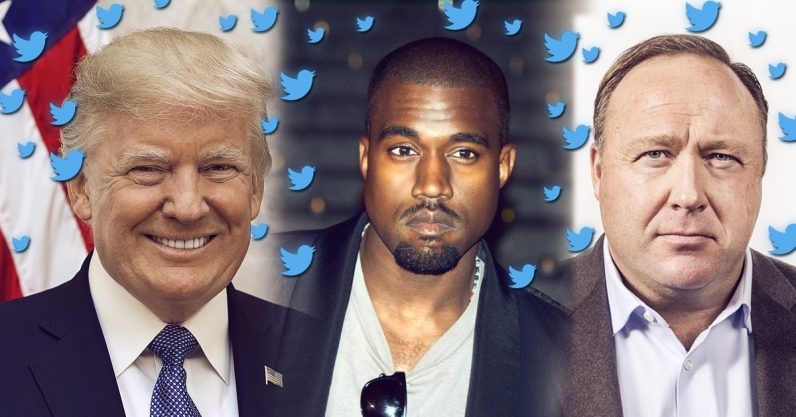 Was Stephen Hawking’s final theory about Kanye West’s recent Twitter resurgance? No. It wasn’t. But it might contain the only logical explanation.

First, a disclaimer: I’ve been a fan of Kanye West’s music since the moment I heard Jay-Z’s song “The Takeover,” which West produced, on the classic 2001 hip-hop album The Blueprint. And, as someone who’s followed his career for decades, I’m perfectly aware that he’s always been a bit of an eccentric.

But these days, he’s as controversial as they come. It almost feels like the arrival of Donald Trump’s political star has given him reason to re-imagine himself in an image that’s a complete 180 from the person he once was.

Note: this isn’t meant to make a statement on Donald Trump or his supporters, but the evidence indicating Donald Trump might possibly be a racist could be thought of as more prominent than any depictions of George W. Bush as one. Instead, this just indicates how radically different West’s views are from when he was rapping about being persecuted by his employers at The Gap for the color of his skin.

And, while it’s no surprise that Kanye’s return to Twitter has been what some might deem peculiar, it’s beginning to feel as though he’s somehow become a Saturday Night Live parody of himself.

You don't have to agree with trump but the mob can't make me not love him. We are both dragon energy. He is my brother. I love everyone. I don't agree with everything anyone does. That's what makes us individuals. And we have the right to independent thought.

And that’s kind of where we are right now concerning Kanye and his incredibly interesting social media presence. We have no clue what he’s going to do or say next.

When this Alex Jones tweet was initially sent, I’m not afraid to admit I assumed it meant Kanye was going on Infowars. And I believed it.

For the record: Kanye is not going on Infowars. According to reports, Jones claims his staff worded the tweet wrong. We assume it was meant to say Jones is going to discuss Kanye West. Either way, doesn’t it make a pretty big statement that we’ve reached a point where it’s completely believable that Kanye West would do the interview?

Free speech is important, and West can make his own decisions. But does Alex Jones really deserve the spotlight that comes with Kanye’s presence? Of course not. And hopefully Kanye realizes this before he decides to try and prove he’s his own man by taking an interview with Jones just to spite his ‘haters.’

Now, I’ve seen some people calling Kanye names, and I’m not down with that. It’s one thing to question his motives, but the pejoratives serve no purpose. He doesn’t actually owe us anything (but we’re allowed to be disappointed).

I also don’t think it’s fair to question the man’s intelligence: he wrote the lyric “mayonnaise-colored Benz, I push miracle whips” and that alone should be enough to show his brilliance. Furthermore, it’s definitely not cool to comment on his mental health. And frankly it’s not our place to question it — everybody has their own mental health to worry about, let’s all sweep our own back porches.

to be great is to be misunderstood

But maybe Kanye’s newest fans should understand that, perhaps, the uproar over Kanye’s Twitter presence and new conservative bent isn’t because people don’t get him.

While I can’t speak for anyone else, as someone who knows about 100 different Kanye songs’ lyrics by heart: I’ve glimpsed his depth of character and spent decades appreciating how deeply personal his music is. I think I get him, as much as a fan can.

And that’s why nothing about this makes sense. Myself and, presumably, millions of other Kanye West fans are simply flabbergasted.

In dark times, when the world doesn’t make any sense, I turn to the one thing that always gives me comfort: science. I don’t have the answer to the condundrum that Kanye’s become, but the late Professor Stephen Hawking may have.

His last paper, “A smooth exit from eternal inflation?” may not have had the gravitas that some of his earlier work did, but it managed to somewhat expand on the theory that we live in one of many potential universes.

And that, dear readers, explains everything. I think our @KanyeWest may have been somehow exchanged with one from a separate, parallel universe. In the comic book world this type of thing happens all the time, and we shouldn’t be so surprised: Kanye’s always been a bit of a cartoon.

Plus, in the ridiculous saga that is Kanye’s social media presence (and some might say his life in general) the title “A smooth exit from eternal inflation?” sounds like it could be the name of West’s autobiography. Or at least his ego’s.

Even those who know him best seem to agree. In a recent TMZ interview Kanye West said, “When you hear about slavery for 400 years. For 400 years?! That sounds like a choice.” and that prompted Will.I.Am, in a separate interview with ITV’s Good Morning Britain, to express his frustration:

To me, that’s a different person that’s saying that, and I hope it’s not to raise awareness so you could sell a record and some shoes, because that would be the worst thing to do, to stir up this very touchy race situation and you be the benefactor from it.

In all fairness, Mr. West clarified his comment on Twitter, but then subsequently deleted his clarification. Of course he did.

But, I think Will.I.Am knows what he’s talking about here: that’s not Kanye.

Let us also remember that according to Occam’s Razor the simplest explanation is usually the correct one. If anyone can come up with a more logical explanation than my theory that he’s been replaced by an @KanyeWest from another universe: please feel free to share it in the comments section.

Read next: DigitalOcean is getting into container hosting