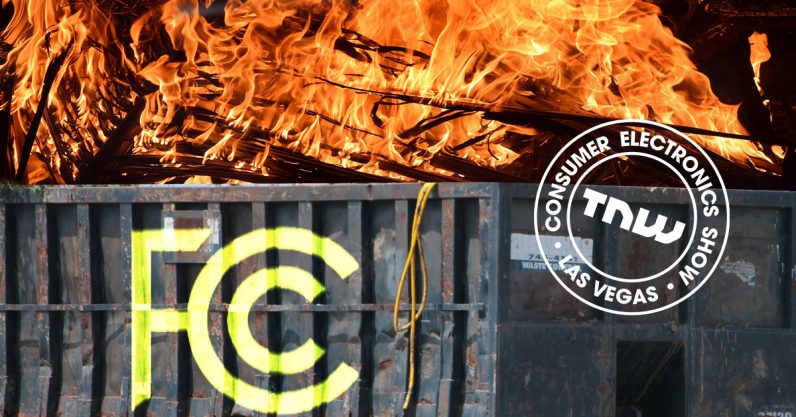 Three members of the FCC yesterday gathered on stage at CES 2018 in Las Vegas to discuss the repeal of net neutrality. No matter what side of the debate you’re on: it was a waste of time and taxpayer money.

Without their leader, former Verizon lawyer Ajit Pai, the panel managed to discuss the issue for almost an hour without actually saying anything.

The commissioners who could make it included Republicans Michael O’Reilly and Brendan Carr, who voted in support of repealing net neutrality, and Democrat Mignon Clyburn who did not.

They were not joined by former Verizon lawyer and current FCC chairman Ajit Pai, who reportedly skipped the event due to death threats. Also missing was commissioner Jessica Rosenworcel – a Democrat who, like Clyburn, voted against the repeal.

The proceedings began with a speech by another fed, David Redl of the National Telecommunications and Information Administration. He mostly droned on about 5G and infrastructure in what appeared to be a mission statement for his office in 2018.

Moderating the event was Julie Carney, of the Consumer Technology Association (the company that puts on CES). She began the FCC panel by beseeching all of humankind to be polite. She called the debate surrounding net neutrality “toxic on both sides” and spent a few moments asking that everyone remain civil. This would prove to be the most exciting moment of the panel.

In what may have been vain attempts at humor, at several times members of the panel attempted to share anecdotes about heated discussions and it often appeared as though all three of them were attempting to paint Clyburn as being slightly unhinged – herself included.

But at no point did anyone participating in that panel appear to have any insight into net neutrality, its implications, and/or any specific reason they voted the way they did.

At one point Carney asked:

Do you think it’s time for a Telecom Act rewrite?

All three panelists responded with a variation of “That’s something for Congress to determine.” There was simply no tricking them into talking about the issue itself.

Most bothersome of all was the lack of substance by any of the three panel members. Clyburn was the sole Democrat, and only member of the panel on the same side of the debate as the majority of all people, and her rhetoric was as much bluster as her republican colleagues’.

She had nothing substantial to add, no talking points for those of us trying to break through to our politicians with facts, just a lot of politics.

During the conversation, for some unknown reason, Clyburn at one point said:

I will continue to be a partner to a free and open and inclusive platform that has allowed for, over 2 – how many? 2.4? 2.6 million square feet of innovation that I would dare not be happening if it weren’t for the type of environment that we are attempting to achieve.

I have no idea what that means, she was probably talking about the square footage of the venue or something and making a statement about how the event exemplified how important access to technology and information is to the future of humanity. But maybe I’m editorializing.

And it’s not being taken out of context or intended to make her look foolish. She was speaking live, we all stumble and say “um” sometimes. The point here is that this is one of the most firm statements she made on the subject of why she supports net neutrality, and it barely made sense.

The commissioners dropped one non-sequitur after another, as they muddled through the net neutrality conversation. And that was it.

There was more talk about wireless communication and infrastructure, but the ‘free and open internet’ conversation was the biggest nothing-burger of CES so far.

At no point during the discussion did any member of the panel give any defense for the way they voted on the repeal, and that’s unacceptable. Why are we paying to fly these politicians from Washington to Vegas?

It made me wish commissioner Jessica Rosenworcel would have made the trip. Perhaps she would have brought some substance to the conversation. When she cast her vote last month, she did so with something meaningful to say:

Luckily, as we reported earlier, there’s still plenty of hope for net neutrality thanks to Democrats and a single Republican.

If you’re interested in letting your local politicians know that you won’t be voting for anyone who doesn’t support a free and open internet you can learn everything you need to know at Battle for the Net’s website.

Read next: Samsung confirms Galaxy S9 will be unveiled next month