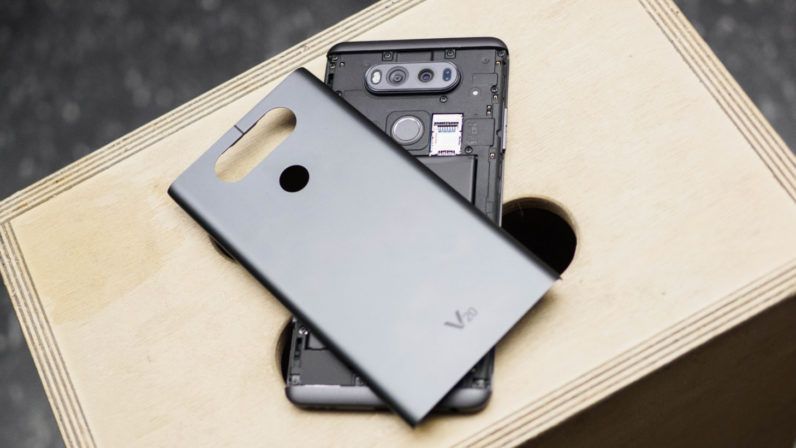 When Apple launched the original iPhone, it was ridiculed for not including a removable battery. 10 years later, it’s virtually impossible to find a flagship phone that does. LG was the last holdout, but now that the V30 is going with a sealed design too, there isn’t a single flagship phone from a major manufacturer that includes a removable back. I’m going to miss that.

This isn’t a condemnation of LG’s choices or a call for the mainstream return of removable batteries. I already think the V30 is one of the best phones of the year, and the vast majority of people don’t need or care about a removable back. I’m just not one of those people, so this is a personal lament.

I review a myriad of devices here at TNW, but the V20 was my daily driver for most of the past year. It had its issues, but for the most part, it was a power user’s dream phone, in an old school Android type of way. It was the only major phone of 2016 with a removable back, it had an easily accessible Micro SD slot above the battery, and it even kept the IR blaster.

These features may seem superfluous to most people, and I’m inclined to agree. But a small group of people, myself included, thought they were one of LG’s most unique selling points.

I often write entire articles on my phone, and with the V20, I could easily upload photos from my camera using the microSD slot without having to finagle with those dumb SIM eject tools or my camera’s sluggish Wi-Fi transfer. This has saved me numerous times during crowded events where Wi-Fi is too congested or when doing edits on my phone is faster than loading up Photoshop or Lightroom.

When my battery died covering news at CES, I was able to pop in a freshly charged one in a matter of seconds. Quick Charge wasn’t practical when you’re on the move all day, and while I could use a power bank I don’t like running around with a cable hanging from my phone and a huge battery pack in my pocket. Replacing the battery was simply the most elegant solution. I also imagine Samsung’s Note 7 fiasco would have been much less problematic if customers could just replace their own batteries.

Don’t get me wrong; I’ve long accepted this fate. While a smart part of me held out hope LG or some other company would challenge its engineers to try to keep the removable back and make sleeker devices, I never really expected it to happen. New technologies and trends inevitably replace the old, and removable backs have long been going the way of the dodo.

Point is, I’m glad Android phones are getting sleeker, but I’m a little saddened by their increasing homegeneity. Android is the OS of choice for those of us who like having options, and a removable back is no longer one of them. 10 years from now, I expect someone will be writing this same article about headphone jacks. They’re already on the same path.

Read next: The password needs to die and better UX will kill it