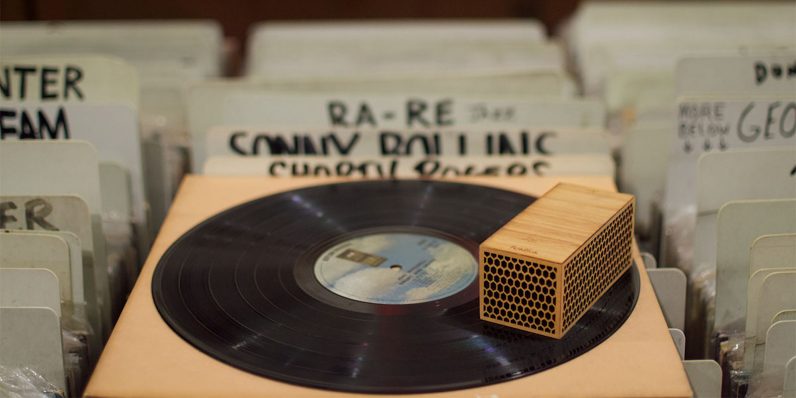 TLDR: The RokBlok is the world’s smallest wireless record player and may be the world’s coolest way to play music — period.

Occasionally, a particularly well-conceived article or review will get right to the beating heart of a topic with just a single line of text.

Such was the case with the RokBlok and this succinct one-line encapsulation from TechCrunch: “It’s cute as a button, clever as hell and utterly absurd.”

Yes, yes and yes. And due to all three, you probably need to have the RokBlok, dubbed the world’s smallest wireless record player, in your life. To help make that decision even easier, it’s now $10 off the regular price, only $89.99 from TNW Deals.

As advertised, the RokBlok is tiny, a touch over 4 inches long with its own built-in speaker. And if you’re wondering how a full-length LP, much less a 45 RPM single, can sit on the RokBlok and play…well, it doesn’t. Instead, the RokBlok climbs on top of the record and scoots around its surface on its own, pumping out your tunes as it trucks along in circle after dizzying circle.

All you have to do is lay your record on a flat surface, fire up the RokBlok, and let it rip. Fashioned from bamboo and a whole lot of tech goodies inside, the RokBlok will jam to the music for up to 4 hours of playtime on its rechargeable battery.

And in case the RokBlok’s on-board speaker isn’t thumping enough for you, you can also connect the player to any device via Bluetooth to blow up the sound as loud as you want. At a range of up to 30 feet, you can use it to spin your music throughout the entire house. And you know watching this little beast tear (yet never damage) its way around some vinyl will be the highlight of your party, no matter what it’s playing.

The RokBlok retails for $99.99, but with this offer, it’s now $10 off, bringing your price down to only $89.99. But let’s be honest…it’s already cute and cool enough to sell for twice that price.

Read next: Tencent knocks Sony out of race to buy Warframe's Leyou