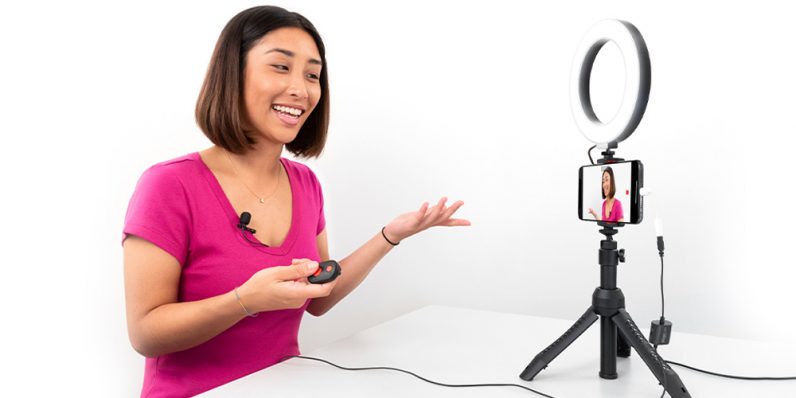 TLDR: These two full-service video production kits from iRig including a multi-function stand, mic and ring light to immediately upgrade your videos.

You’re home. You’re bored. You’ve got a lot of time to kill. You’ve got a smartphone. So we’re going to assume every single one of you checking all those boxes at some point recently also thought, I should really make a video.

Whether you want to pontificate on YouTube, interact with friends on Facebook Live streaming or just start creating phone videos that look and sound a whole lot better, it’s time to make a small investment in the necessary equipment to make that leap.

Thankfully, if you’ve already got a smartphone, then making that type of investment isn’t nearly as expensive as you might think. In fact, iRig has a pair of video kits that essentially put everything you need to elevate your game altogether in one convenient package.

The iRig Video Creator Tool Bundle ($89.99; originally $99.99) offers a collection of three must-have items to give any videos a more professional look. First, the iKlip Grip Pro is a multi-function iPhone and camera stand that’s practically a Transformer. After you lock in your phone, the base can convert from a secure tabletop tripod to a handheld monopod to a telescoping selfie stick style arrangement that extends your camera for a shooting distance of up to 2 feet. It also comes with a standard UNC ¼-inch universal mount if you’d rather shoot with a small digital camera or a GoPro action cam.

As for your audio, the iRig Mic Lav is a compact pro-grade lavalier mic that attaches right to your phone for premium sound recording that your phone’s own built-in mic can’t touch. And you’ll end up looking a whole lot better with the 6-inch LED ring light with adjustable color and brightness levels to better illuminate, soften harsh glares and overall flatter your face.

Meanwhile, you can also take a step up to the iRig Video Creator HD Tool Bundle ($169.99; originally $199.99). In addition to the iKlip Grip Pro and a larger 10-inch ring light, this package gives you a big audio boost with the iRig Mic HD 2, a handheld digital microphone for capturing radio-ready sound quality that connects via Lightning or USB cable.

Either way, each package will have you producing videos that instantly boost your credibility…even if you’re blathering on with the same stupid stuff you’ve always said.