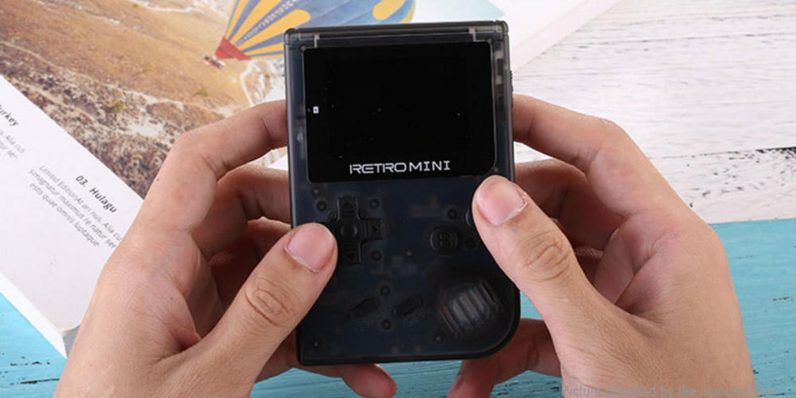 The RetroMini reminds us of something. Man, what is it? The handheld shape and feel seem so familiar…but we can’t quite put our finger on it. Well, it’s just a game, boy…we’ll figure it out eventually.

The retro gaming boom is in full effect — and if you want to relive the 90s and play just like all those Nirvana-pumping, pog-collecting kids back in the day, just pick up the RetroMini for a few minutes and be transported back to an age dominated by Pokemon and Mario.

If you got off on picking up the NES and SNES Classic editions with their couple dozen vintage games each…well, how does 900 games strike you? Yep, the RetroMini comes packed to the gills, sporting a roster of 900 classic Gameboy, Gameboy Advance and NES ROM games from the gaming industry’s second-gen heyday.

Sure, Pokemon and Mario owned the 90s — so of course, they’re represented on the RetroMini (Pokemon Emerald, Mario Kart and Super Mario World 2, to name just a couple). But c’mon…this is 900 games we’re talking about! The full roster sports all the luminaries of 90s gaming and pop culture, including Donkey Kong, Zelda, Sonic, FIFA, Pac-Man, Power Rangers, Gundam, Castlevania, Crash Bandicoot, Barbie, Tetris, Grand Theft Auto and heaps and heaps and HEAPS more.

Just play one new game a day — and it’ll take you over 2 and a half years to play ‘em all. And at less than 10 cents for each game?  Whether you lived through the 90s or not, the RetroMini (available in black or white at $20 off its regular price with this offer) will make you feel like you did.

Read next: ﻿﻿﻿﻿﻿﻿The Facebook ad-pocalypse is coming, so spend your budget on creativity