So you may have heard about a little fight going on in the YouTube community, between two beauty gurus named Tati Westbrook and James Charles. The drama tornado has engulfed aspects of the internet that aren’t even remotely related to the two, but one of the reasons may be an organized and inquisitive network of channels devoted to drama. If you’re new to the world of YouTube gossip, here’s what you need to know about these channels and what they do.

If you aren’t familiar, Tati Westbrook and James Charles both run wildly successful beauty channels on YouTube, upon the backs of which they’ve built large businesses. Until recently, they appeared to be close friends — and then Westbrook posted a video in which she publicly called out Charles on alleged bad behavior. A very large portion of the internet has been split into Teams Tati and James ever since.

But, unlike virtually everyone else on the internet, I’m not here to talk about Tati and James — not directly anyway. That drama has become its own Ouroboros, turning on itself in a perpetual cycle of misery. Even Tati herself said in a recent video she wanted the bleeding to stop. No, what I’m here to talk about is a side of YouTube you may not be aware of, one which fed this drama and helped to turn it into the big deal it currently is: drama channels.

Drama channels are, as the name implies, all about dishing out information on whatever tiffs are going on in the world of social media influencers, be they Instagram models or niche YouTubers. And I don’t just mean some mouth-breathing teenager mumbling about a he-said-she-said drama on Twitter. No, drama videos — especially the ones from the really big channels — involve documentation, investigative research, and insightful commentary. These modern-day Hedda Hoppers pursue their leads with a zeal and relentlessness that’s almost frightening.

Before we go on, it’ll probably help lessen the confusion if I explain the omnipresence of the word “tea.” Like most slang terms, its origins are a little hard to uncover, but according to Merriam-Webster it originated with black drag culture as “T,” meaning truth. I’ve also heard that it’s from the tradition of trading gossip over cups of tea at a party. If you’ve been even a tangential consumer of internet meme culture, you probably associate it with that one pic of Kermit nonchalantly sipping tea. 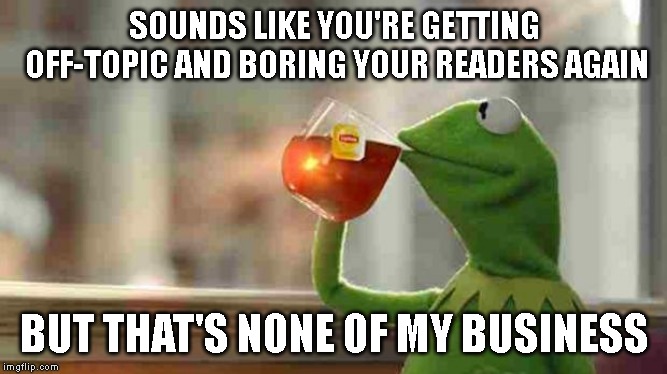 Long story short, “tea” is gossip. Share the tea, spill the tea, here’s the tea: its all about trading that sweet, sweet gossip. And that’s exactly what these drama channels are all about. Many of them have names that reflect this: Here For the Tea, Tea Spill, and What’s the Tea are just a few examples.

This might seem like some petty and frivolous use of new media, but in a world where Bravo TV and TMZ exists, I challenge anyone to convince me that these drama channels are doing anything that different than they are.

Why do they exist?

There’s some irony in the fact there are now whole channels on YouTube devoted to hashing out scandals and feuds on YouTube, as if the site has become its own self-contained ecosystem of celebrity. And sometimes, it seems the need for drama can feed on itself a little bit, like the aforementioned Ouroboros. Sometimes the attention drama channels draw to a YouTuber’s scandal does nothing but heighten that particular channel’s profile.

But that being said, there are lots of people who want to watch this stuff, who are invested in the lives of these particular characters and want to know more about what’s going on. And drama channels fill that niche. They collect the details of what’s going on in a particular scandal, from a variety of different social media sites. They then edit the information into a video in an easy-to-understand fashion. Some do slideshows, or play clips (Sebastian Williams and Shook are good examples of this), while others give vocal commentary (Spill and Petty Paige deserve mention here). Someone like Philip DeFranco, whose show also covers non-YouTube-related topics, would be an example of a drama channel that’s a little bit more TV-esque.

While I’m certainly not going to suggest they have the journalistic rigor of a New York Times investigative team, for example, they do act as a good reminder of what the larger internet often likes to forget: YouTubers are very famous, very influential people. And if they haven’t done something problematic, they’re affiliated with or linked to someone who has, and often very few people other than these channels seem to notice until after a ‘Tuber’s done something unforgivable.

If you look up info on YouTube-based scandals in the recent past — say, for example, Tana Mongeau’s ruinous, abortive convention or Logan Paul’s exposure of a dead body in a forest (or as I like to call it, the Fumble in the Jungle) — you’ll frequently find it’s the tea channels who have saved screenshots of deleted videos and tweets or vanished Snapchats. Right now, they’re the ones who save and collect the “receipts” of these dramas.

As YouTube drama gets bigger and becomes more important to a larger sect of the world’s population than the average reality tv show, we’ll probably see even more drama channels crop up, eager to capitalize on the rabid viewers who have to learn more about the people on the other side of the screen.