File storage is a mess right now. Cloud storage services have stepped in to help, but the NSA’s surveillance programs has eroded much of the trust in the cloud just as users were starting to overcome their fears. 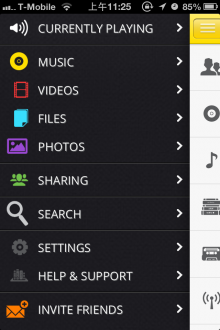 Entangled Media’s Younity “personal cloud” app takes a different approach. Instead of storing files in the cloud, it leaves them where they are. In essence, Younity exists as an auto-updating filesystem on your iOS device with multiple levels of metadata organization.

Younity’s iOS app then serves as a file browser with simple media support. Quik.io, which I’ve written about before, has a similar model, but I prefer Younity’s implementation.

To get started with Younity, install the desktop app on your Windows PC or Mac, and then download the free iOS app (an Android version is in the works). Indexing your data will take a few minutes, but once it’s complete, you’ll be able to pull up your files on your iPhone or iPad. Media files can be streamed, downloaded, or shared.

The downside to Younity’s solution is that you’ll need to keep your computer on to access your files, but the upside is that Younity itself never has direct access to your data, so you don’t have to worry about government subpoenas. Devices running Younity communicate with each other over LAN or HTTP relay.

If you’re worried about on-device security, you can PIN lock the app. File sharing takes place either via Younity or over Facebook. Currently, the service is offered as a free beta, and a premium option is forthcoming.

Younity does have some limitations to what files it can handle, though. For instance, an episode of Mad Men I’d purchased on iTunes was unplayable and also unavailable for download. It also listed one video file filmed on my GoPro camera as unsupported, despite handling other similar files without a problem. 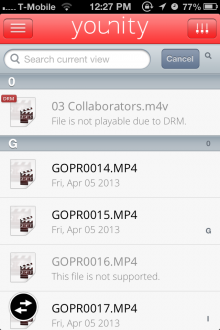 Younity’s still in an early stage, but Entangled Media recently got an infusion of capital that should help it add on features. The startup recently raised $3.5 million from Crosslink Capital, Draper Associates, PROfounders Capital, Lowercase Capital, Michael Birch, Tekton Ventures and Knight & Bishop, as well as angel investors to continue working on the product.

One feature that’s missing is the ability to index an iOS device and access those files from a computer, but Entangled Media CEO Erik Caso says that’s on the roadmap.

Keep in mind, Younity is not a backup solution. If you, like me, have a messy system for storing files across devices, Younity doesn’t solve the problem at the source, but it does create a new layer on top of the clutter.

Entangled Media’s vision of device-agnostic file storage that’s tied to a single identity appeals to me. I’ve got files across several different computers and iOS devices, and I’m happy to keep it that way as long as I can find and access files when I need them. Younity isn’t a complete file storage solution, as I’ll still need to find a way to backup data on my own, but it’s an elegant one.