On the heels of adding Apple TV integration earlier this month, QuikIO has announced version 2 of its media streaming service and added a convenient iPhone-to-iPhone file sharing feature.

QuikIO is hard at work developing a cross-device solution for painless media management. Its iPhone and iPad apps provide an easy way to stream media and access files from Windows or Mac computers. Version 2 is still forthcoming, but the company has already added the file sharing feature to version 1.0.3, which arrived on Wednesday.

The new Quiksend feature, which is being shown off at this week’s Macworld conference, pulls desktops out of the equation and allows for direct connections between mobile devices. We’re told it will require an Internet connection, though, as it’s designed to work both locally and remotely. 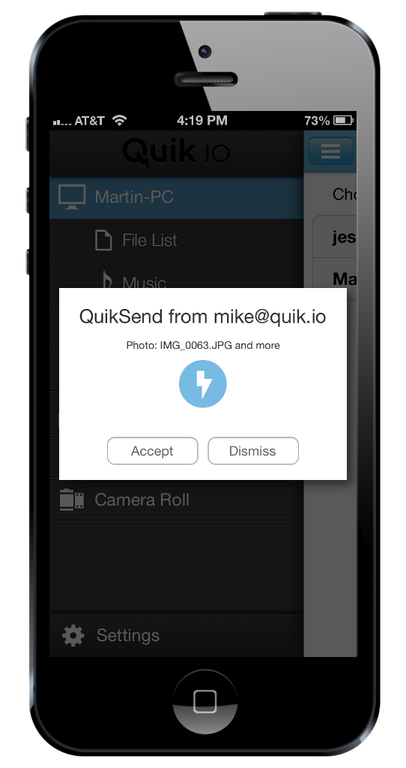 In order to transfer files, the sender selects the files and then either types in the recipient’s QuikIO user ID or uses a ‘Find nearby’ GPS feature. The recipient then accepts the files in the Quikio app and the transfer begins.

Quiksend has access to videos and photos in the iPhone’s camera roll app, files from your computer saved in the QuikIO app, and files previously received and saved from another user.

“QuikIO’s solution is consumer friendly since there are no special requirements for network configuration, hardware capability and OS version – as often needed in the Android world,” CEO Michael Chen said in a statement.

The service has already amassed hundreds of thousands of users since launching late last year, and Chen says it has grown ten-fold over the past month.

Adoption is likely helped by the fact that the apps are free for a limited time. QuikIO says it plans to eventually charge $0.99 for the iPhone version and $1.99 for the iPad edition. The company is planning to add support for other devices in the near future.

QuikIO is built by Cisco veterans and has raised $1.28 million from Enspire Capital and angel investors.