Following a wildly successful run as a paid app, Rovio has now released a free version of Angry Birds Space on iOS that is powered by advertising and is limited to the first 10 level. The new app, which is available for iPhone and iPad, shows that Rovio still sees room for expansion when it comes to reaching and luring in new users and fans.

The features, from Rovio: 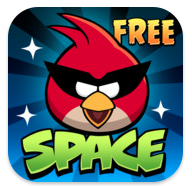 The App Store now has a FREE version of Angry Birds Space for iOS devices, like the iPad and iPhone! You’ll have access to the first 10 levels, which should give you a pretty good idea of what to expect.

There’s no word as to if this deal will make its way to Android, but it’s not abnormal for Rovio to release on iOS first before expanding to other platforms. You can download the free apps via the links below:

Only last month the company acquired the IP rights to Casey’s Contraptions, and now Rovio is planning its first non-Angry Birds game available to the public. As you can see, however, the company is by no means finished with these birds.