Four months after it rolled out an all-new Weather app for iPhone, Yahoo has announced its Android version will be receiving a big lick of paint. 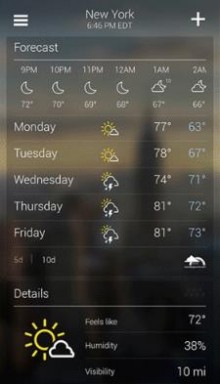 Besides a general design overhaul, it also features a number of other enhancements, including 10-day and 24-hour forecast, ‘chances of precipitation’, wind and pressure, moon phases, UV patterns, sunrise and sunset times, an interactive map and – just because it’s Android – a new widget for lock screens.

Flickr-photo integration, whereby it taps user images by time-taken and weather, is also being brought to the “front of the experience”.

The update isn’t yet showing up for us, but Yahoo has announced it will be arriving globally from today.