2012 was a big year for mobile payment and analytics platform Bango, after signing a deal in February to power Facebook’s mobile payment solutions, before the social network finally took in-app payments to mobile with carrier billing services in the US, UK and Germany in September, followed by France in November.

Throw into the equation Bango’s first carrier billing tie-up with Google Play, and its existing partnership with BlackBerry-makers Research in Motion (RIM) for BlackBerry World, Amazon for its App Store, and it’s fair to say that the future’s looking very rosy indeed for the UK company. 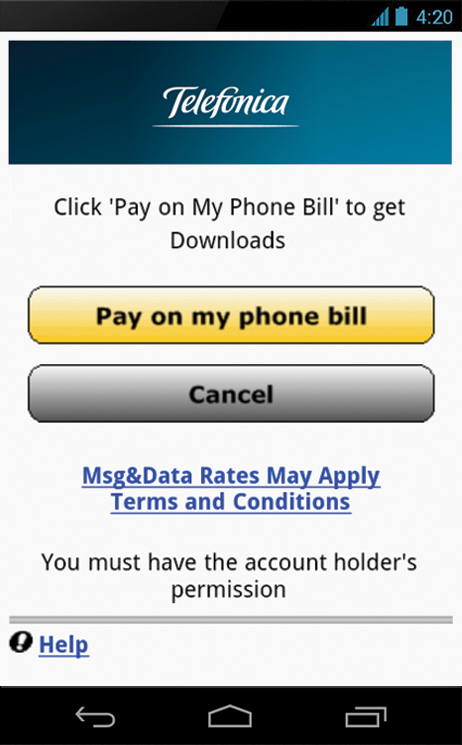 Now, Bango has announced a global mobile payments partnership with Telefónica Digital, which will create an “enhanced direct-to-bill payment experience for mobile app stores.” And this could see in-app sales via carrier billing shoot through the roof, particularly in developing countries.

Just to recap, Bluevia is a Telefónica platform for developers to take apps, Web services and other ideas direct to market. A key element of Bluevia is its operator billing functionality, allowing users to bill the cost of a purchase to their phone bill with ease. It has the potential to revolutionize commerce as we know it, with credit cards potentially becoming redundant as a result.

So, carrier payments across the myriad of app stores currently in Bango’s network, covering the likes of Facebook, BlackBerry, Google and Amazon, will become a lot easier as a result of this, with a single API. Indeed, Telefónica has more than 300 million subscribers across its various in-country subsidiaries around the world, so it will have a big reach, across both developing and developed markets.

And this is a key point. Figures provided by Bango suggest that where it has introduced operator billing to developed markets, the sales of digital goods have increased as much as 400%.

Bango say these are real numbers, reported by big name, frontline operators and app stores. So it helps to illustrate the potential for carrier billing across the board. And given that Latin America is such a huge market for Telefónica, this only adds to the significance.

The platform will be available to pretty much all app stores, and the big selling-point is that there’s no requirement to enter personal information or leave the active payment session.

“Telefónica and Bango share a strategic vision: to widen access to paid content by standardizing and simplifying operator-billed mobile payments,” explains Bango CEO, Ray Anderson. “Bluevia is a bold and valuable initiative by Telefónica to establish a unified set of billing APIs. We will standardize on Bluevia to connect with Telefónica’s 314 million subscribers around the world, and look forward to welcoming other operators who join this initiative, as Telenor has done.”

The partnership between Telefónica and Bango was negotiated by Telefónica’s Financial Services and Global Partnership teams, based in Madrid and Silicon Valley, and headed by Joaquín Mata and Wayne Thorsen, respectively.