Hipstamatic, the makers of a self-titled iOS photo app that competes against Instagram, is unveiling a brand new standalone app called Oggl. The company seeks to evolve its three year old service and provide a new experience that doesn’t center around adding more filters, but will help engage its 4 million users. Oggl is available starting today on an invite-basis.

If you thought that Instagram won the photo-sharing app war, then you’re probably not that mistaken — after all, it was acquired for nearly $1 billion by Facebook and has over 100 million users. But Hipstamatic has a loyal following and is pretty active still. Although the company has just 4 percent of Instagram’s users, there are 60 million photos being taken each month, with a total of 2 billion shots snapped (but not published) since the company’s first app launched.

In an attempt to create a community for creative people, Hipstamatic is launching not only a new mobile app, but one that has the essence of a social network. A blend of Instagram and 500px, the company says that Oggl will offer a new way for Hipstamatic’s crafted filters to be experienced while also connecting the individual user with the rest of the community, as well as likeminded creative folks around the world.

Evolution from a Polaroid to a Point and Shoot camera

Known as a photography app, Hipstamatic actually originally started as a design agency in 2006 where it worked with startups and Internet companies. Three-years later, it decided to launch its mobile service. It also charges $1.99 per download.

Oggl could be thought of as the next evolution of the photo-sharing app. With Hipstamatic, users were forced to choose a filter and snap a photo with limited editing controls in-between — almost like using a Polaroid camera. Oggl goes one-step further, with the ability to make modifications to the filters, lenses, and other settings either before or after the photo is taken. It also offers other capabilities as well — something analogous to a point and shoot camera.

We spoke with Lucas Buick, co-founder and CEO of Hipstamatic, who says that users of the app are interested in snapping much more creative photos and often want to take their time in post-processing, editing only the best one. He suggested that users don’t want to share every single photo snapped.

Oggl is an offshoot of Hipstamatic’s photo app. It comes with many different features that the company says may not be fond of using right away. 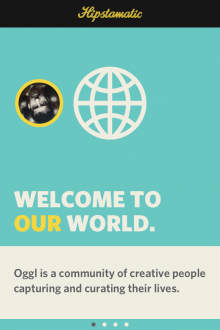 Available only for iPhones right now, Oggl offers two key features that separates itself from the other apps: capture and curation.

With the former, users can deploy a “capture-first” experience where it gives them the ability to choose from one of several “favorites” installed based on circumstances. These best-way to describe “favorites” is like a photo’s white balance. Either at the beginning of the process or after the photo is shot, “favorites” can easily be updated.

Users can download the iOS app and will find that the experience is a bit different than what they were used to with Hipstamatic. The app comes with “situational filters”, which Buick defines as “in every situation in life, there’s a perfect filter.”

The company has teamed up with renowned photographers like David Loftus to come up with filters meant to simply not glamorize the photo, but in fact to actually make photos look good in certain lighting and situations. Situations that Oggl has accounted for include landscapes, portraits, nightlife, food, and sunsets.

With curation, users can share their best photos with the company’s network. Oggl features a Curated Editorial Feed that will display Hipstamatic’s choice of creative photos. Images can be curated based on what’s popular today, or by geo-location. 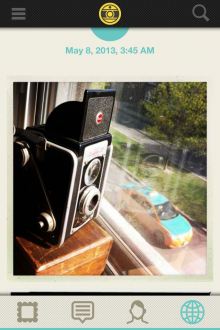 The addition of a social network is a new thing for the company. Buick says that Hipstamatic didn’t think that it was the core of what the service was about. Now, after enough user input, it has been added. Through this community, users can share their best work taken through Oggl and also view other photographs to be inspired.

With the Hipstamatic app, the most it was social involved pushing photos out to Twitter, Facebook, Instagram, Flickr, and other services. With Oggl, users can share their work in a dedicated area within the app and have others critique it. Photos can be favorited, tagged, and more.

Oggl is also now touting the ability to allow users to edit their photos after it’s been taken. In Hipstamatic, all processing needed to be done before a photograph was shot, but now Oggl is hoping users will focus more on capturing the moment and then worry about adjustments later on. Of course, competitor apps like Camera+, Instagram, Kitcam, and others have all made post-production edits possible since the beginning.

A camera app with a subscription model 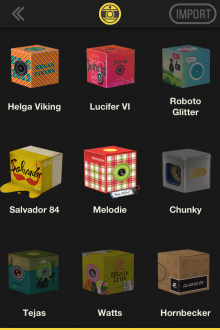 Unlike Hipstamatic’s original app, Oggl is free to download. However, users will receive five free lenses and films. There are more tools available and for a monthly subscription of $0.99, users can receive access to the company’s entire catalog of current lenses and film gear, and even get updates on new ones each month.

For those using the Hipstamatic app, if lenses were purchased in the past, they will be transferred over to Oggl. Through the use of a single log-in, lenses and film gear can be brought over with no complications.

The launch of Oggl is another major step for  Hipstamatic’s, which appears to be getting back on track following layoffs in August 2012. At that time, the company let go of everyone, save five of its core staff, including engineers and designers. When we attended a press conference on Tuesday, the company had clearly hired more people since then, so there appears to be some sort of revitalization taking place.

In responding to the layoff news,Buick had penned a post saying that it was a result of a discussion about where the company was going in the future:

Over the last year we simply lost our focus. Art and creativity were no longer the center of what we did. Hipstamatic was founded as a lifestyle and culture brand that happened to make software. We aren’t a typical software company, and our inability to scale and ship became clear.

The company also announced that its Snap magazine, a mobile photography publication, has become the number one photo and art magazine in the Apple App Store and is being read by nearly 400,000 people monthly.

Oggl is available now in the Apple App Store to use on devices with iOS 6.0 and above. An Android version might be possible, but Buick says that right now it’s not in the immediate future. Right now, usage of the app is by invite-only and there is a wait list to get in. Buick tells us that it’s to help scale the service.