Toy camera app company Hipstamatic has fired all but 5 of its core staff, including engineers and designers, The Next Web has learned. The company had been staffed up and working on a new release, but has only released one update in the last several months.

Now, the engineering staff has been laid off as the company tries to decide what to do with itself. The app is a perrenial favorite among iPhone users. I like it, Blake Lively likes it, but it is currently ranked #99 in the top paid iPhone apps. According to what we’ve heard, the company ‘hasn’t been making enough money’, and is looking to retool to figure out how to start doing that again. The app has, in the past, been a lucrative source of revenue, with in-app purchases for ‘film’ and ‘lenses’ driving much of that.

The photo app market has been crowded with contenders of late, the 800lb gorilla, Instagram. Hipstamatic was the first app to partner with Instagram, in a deal that allowed it to cross-post photos. Just a couple of weeks later, Instagram was snapped up by Facebook, but the integration remains.

Would love if the entire team could get snapped up by someone. Really is an awesome fucking team. Totally squandered where we were.

Developers Jonathan Wight and Justin Williams were among those let go, with a full severance package.

The company had been working on a new version of its app that tried to integrate many different types of photo-app features into one, including privately sharing photos with people in a sort of ‘anti-Instagram’ fashion. The update was an attempt to try to make it a universally appealing app that was friendlier to new users. 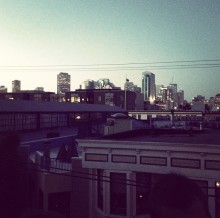 Recent updates to the app included the ability to remove the ‘faux-parallax’ feature that made it hard to frame photographs accurately, mimicking the toy cameras that were the app’s inspiration.

Hipstamatic confirmed that there were changes being made at the company, issuing the following statement:

We are restructuring the company, but business is moving forward as usual. We’re heads down focused on making beautiful, creative and fun products for our community and the world. We’ll definitely be excited to share what’s next when it’s time.

Hopefully they get the show on the road and find the inspiration they need, because the app is a favorite and I’d like to see it get better, rather than go away. Either way, there’s now a lot of talented engineers and staff on the market, so if you’ve got openings, I’d start making calls.

Meanwhile, Instagram has rolled out a significant upgrade to its app.

Update: A Hipstamatic representative has contacted us to refute the information from our source above, stating that “the recent changes at Hipstamatic aren’t about us not making enough money.”

They also point to a post today from the company’s CEO Lucas Buick which discusses the future of the company and the reasons for the layoffs:

Letting people go is never an easy decision. Yesterday’s reduction in staff was the result of endless discussion and debate about what we want our company to look like in the future. It was in no way a reflection of the work ethic or talent of those no longer with us. Over the last year we simply lost our focus. Art and creativity were no longer the center of what we did. Hipstamatic was founded as a lifestyle and culture brand that happened to make software. We aren’t a typical software company, and our inability to scale and ship became clear.

Some might view it as a setback for the company, however, it likely wasn’t. We’ve shipped very little in the past 9 months, but by streamlining our organizational structure, we are planning to ship more products and updates in the next few months as we reset and rebuild our team.

You can read the rest of his post here.