Tripl is a social travel guide with a difference. It doesn’t recommend places to visit, but instead uses your social graph to find people who you should meet while you’re away. The story of how it came about involves a transatlantic relocation and plenty of frustration with the mentality of investors in its native Sweden.

This beautifully presented service harnesses your Facebook account to analyse your current ‘travel network’ around the world – friends and contacts you have in different parts of the world and the people they have recommended as worth meeting.

If any of the suggestions interest you, you can request an introduction from your mutual friend. For example, if I’m ever in the Republic of Congo, I’ll be sure to request an intro to someone recommended by one of my Facebook friends. You can also add trips you’re planning, to help you find interesting locals at your destination.

This video explains the basics of Tripl:

Tripl launched publicly this month after seven months in private beta, but what is available now is only a glimpse of the company’s vision. With an API in the works, Tripl plans to become a central platform for structured social travel data. Online travel agencies will be able to use the data to provide richer post-booking experiences for their customers, with the aim of keeping them loyal and increasing sales. 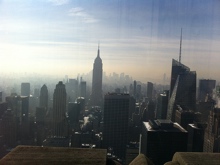 With its roots in Stockholm, Sweden, Tripl had to relocate to New York City to find the funding it needed to pursue its vision. Co-founder Peter Sullivan was in the city supposedly to study for a two-year Masters degree, but ended up immersed in the local startup scene, launching a social travel site called Vacation Relation in December 2010.

After raising $300,000 angel funding in Stockholm, the team needed additional funds to achieve its goals for what would become Tripl. Sadly, Sweden wasn’t a very hospitable place to do this. “Most early stage investors were not interested in investing in a Swedish company, due to local law, structure, and communication,” Sullivan says.

Instead, New York City’s growing tech scene was in Tripl’s sights. “We sent the entire team to NYC this September and stayed in a uber cool artist loft located in SoHo where we met with most of NYC’s prominent investors,” Sullivan says. “The ecosystem was incredible and we know we needed to start making changes to get the company structure over to the US as soon as possible.”

Early next year, Tripl will have officially become incorporated as a US company and will begin hiring in New York. It seems that despite the success of Spotify, Sweden isn’t the ideal place for a tech startup, with talent more interested in agency work than entrepreneurship, Sullivan says. “The Swedish market is full of very talented designers and developers however the idea of creating a new innovative company is stifled by the allure of creating a web bureau in the hope of working with big brands like national banks.”

New York’s lively startup scene, by contrast, makes it much easier to get things done. “US investors understand the risk associated it with the company,” Sullivan says. “Some EU investors wanted to see discounted cash flow statements and spreadsheets of estimations of revenue production that would be 100% incorrect.”

In Tripl’s experience, people are willing to create connections more openly in New York than in Sweden. “We were introduced by a VC that will be funding us now, through a VC who liked us but decided to pass,” Sullivan explains. “In Sweden there is no such thing as ‘Treasury Stock’ for private companies which makes providing equity options to employees much more difficult as an allotment of stock can’t be owned by the company. This also creates problem when dealing with buy back or vesting agreement between partners, and co-founders.”

This all paints a frustrating picture for those looking to promote Europe as startup-friendly, but it’s worth noting that culture and legislation varies from country to country, and sometimes a cultural shift is needed more than a legal one. As we found in Copenhagen earlier this year, the startup scene is thriving there in spite of a government that isn’t as welcoming to startups as it could be.