This article was published on September 25, 2011

Think about the big European tech startup cities, and London, Berlin – maybe Amsterdam, will probably come to mind. However, up in the Danish capital of Copenhagen, a scene is emerging that’s well worth paying attention to. A rich vein of technical and design talent is building a new generation of companies with an ambitious international outlook.

At Founders House, a co-working space for young Web and mobile startups, teams of emerging talent work in close proximity. From Y Combinator company AppHarbor and file sharing firm Ge.tt to stealth-mode offerings just getting off the ground, the facility’s co-founder Tine Thygesen says that working together allows the startups to share resources and skills.

Opened six months ago, Founders House is an invitation-only facility. Startups don’t need to have secured funding to move in, but they do need to be ambitious enough to want to change the world. What they get in return is a ‘no rules’ environment where teams work and socialise together. Startups can share skills and often hold workshops on things like coding skills.

The atmosphere in Founders House is infectious and there’s barely enough space to contain all the teams, meaning that it’s expanding to a second floor of its central Copenhagen building.

The early stage buzz is shared a few kilometers away at the Nokia campus, which accelerator scheme Startup Bootcamp calls home. A member of the Techstars network, the current crop of teams taking part range cover sectors as diverse as mobile gaming, music, clinical trials and real estate. As with Founders House, the co-working atmosphere here helps startups make the most of each others’ skills. It’s not all accelerator teams either, social service for frequent fliers Planely, which we named as one of our European startups to watch in 2011, takes a small huddle of desks in the corner.

So, there’s plenty of emerging startup talent in Copenhagen, but to see why it is becoming a notable startup city, it’s worth looking to the more established tech companies based there.

Enterprise-focused Podio, which allows workers to collaborate and create their own apps to help them with specific tasks, has come a long way from when it was founded in a basement in 2009. Now with a team split between a large Copenhagen HQ and a San Francisco presence, the firm is funded to the tune of $4m by VC firm Sunstone Capital.

Co-founder John Froda says that Copenhagen has the basis of a strong startup city because of a culture and tradition of collaboration, coupled with a strong coding and design skill base. The Danes learn English early at school and tech startups in the country tend to use English as the first language around their offices, helping them attract international talent that may be uncomfortable speaking Danish. Podio, for example has people of eleven nationalities on its staff.

Froda notes that there wasn’t much of a startup ‘scene’ in Copenhagen when Podio started out, but that this has changed in recent times. He says that ‘business-focused companies with a consumer twist’ are particularly big in the city, and CEO Tommy Ahlers sees it as likely this will grow as a trend across Europe as it’s a lot easier to get money out of businesses than consumers.

That’s an opinion demonstrated a short walk from Podio’s offices at the headquarters of Tradeshift. While its product, which builds a social network around the process of paying invoices, may not sound particularly ‘sexy’, it has real potential to transform the way business is carried out. Founded by a team that started out building invoicing systems for the public sector, Tradeshift has developed a system that allows developers to create apps powered by its platform to ‘oil the wheels’ of industries entire supply chains.

CEO Christian Lanng says that Danes are attracted to starting business-focused startups because the country is traditionally a trading nation with many people working in industries such as shipping. It’s simply a natural progression to transfer that approach to the country’s tech startups. Like Podio, Tradeshift has attracted staff from around the world, with eighteen nationalities on its staff. A better culture of work-life balance is one thing that attracts non-Danes to work at the company.

The way the service works leads to viral growth – an invoice sent via Tradeshift leads to the payer signing up and, if all goes to plan, start invoicing using the service too. Things are looking promising just 15 months after launch, with investment from PayPal and 60,000 users. While not yet profitable, the company is investing in growth, particularly targeting big companies with large supply chains. 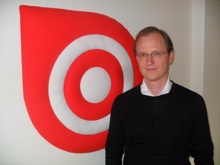 Across town, things are looking good at document publishing platform Issuu too. CEO and co-founder Michael Hansen says that the company has seen rapid growth since its official launch in 2008. A flat screen TV on the floor of the new, as-yet unfinished offices that house most of its 46 staff displays a visualisation of documents being read and uploaded to the platform in real time. Hansen says that the company sees between 10,000 and 15,000 documents uploaded each day, and 250 document views per second at peak times.

Hansen had aspirations to move to Silicon Valley when he was younger but Copenhagen more than suits him now and he sees it as a great place to launch a tech startup. Pioneering technical talent behind languages like C++, C# and Ruby On Rails came out of Denmark and there’s less of a fight for developers there than in Silicon Valley, where startups struggle to compete with the salaries offered by Google and Facebook. Interestingly, both Hansen and Tommy Ahlers of Podio note an above average number of attractive women as being an important factor in attracting international talent to Denmark. Often men will move in from elsewhere after marrying Danish women.

Another growing startup, Endomondo, is housed in a former gunboat factory which used to build and launch battleships to fight the British during the 19th Century Gunboat War. Now the social exercise company is using the building to launch its own battle against competitors like RunKeeper and Sports Tracker.

Co-founder Mette Lykke says that the company has no plans to leave Copenhagen, despite an intention to expand – it seems that a Copenhagen HQ and a San Francisco satellite office is the most common tactic employed by Danish startups looking to make their presence felt in the US market.

All is not rosy for Copenhagen as a startup city though, Podio CEO Tommy Ahlers cites a lack of venture capital as a problem. While there is some angel activity, there’s not enough of that either, he says. High taxes on businesses and a high general cost of living make starting a company in the country not as simple as it should be.

Meanwhile, a Danish cultural tradition of ‘keeping your head down’, not drawing attention to yourself and being a loyal employee of an established company instead of an entrepreneur means that it’s only the truly brave who make the leap to launch their own companies. The lack of successful ‘poster children’ to inspire a new generation, beyond helpdesk service Zendesk which relocated to the US two years ago, is another factor.

Across Copenhagen though, there’s a clear message that things are changing. From the teams just staring out at Startup Bootcamp and Founders House, to the more established likes of Podio, Tradeshift, Issuu and Endomondo, Copenhagen is a hungry European startup city that’s well placed to rival the likes of London and Berlin.

Podio funded the travel and accommodation required for this story.