At the LeWeb conference in London earlier this week, Efe Çakarel of MUBI took to the stage and most people expected him to talk about the latest from his video on demand service. What he delivered instead was an insightful talk about working outside of Silicon Valley.

Naturally there were plenty of European entrepreneurs and businesses at the conference, highlighting innovation from throughout the region, but taking on the fragmented market and spotting talent can seem to be a challenging task for businesses who are mostly accustomed to life and work in The Valley.

Efe Çakarel founded MUBI in Palo Alto, but the roots of the problem he set out to solve started miles away on a different continent.

“It was started because of a personal need,” he explains. “I was sitting in a cafe in Tokyo in 2007 and I wanted to watch a movie online. Japan has the fastest broadband speed in the world with 53 megabits per second. It’s very advanced in terms of consumer experience, especially when it comes to mobile. But yet there was not a single platform that allowed me to watch a movie while sitting in that cafe.”

The problem seemed strange in the context of sitting in a cafe in Japan. The country has the third biggest film market in the world. Film is a 120 billion dollar business, 52% of it is home video, DVD and pay TV like Sky. Çakarel spotted that there would be a shift in this area in the coming years and moved quickly on an idea. “I started writing a business model on the flight back to San Francisco,” he laughs.

Though the business was formed in the states, it now takes into account global hotspots where growth is possible for video on demand.

“The US is the largest and most vibrant Internet economy,” he notes. “But over the years we saw there is a much bigger world outside of the US with very little competition so we started to study different countries and the dynamics of them.”

A move like this is not without its obstacles and it can seem a risky proposition with high probabilities of slow growth and even possible failure. “Everything is harder because suddenly you don’t have an audience of 280m people like in the United States and you’re going after Norway and Sweden with completely different markets and languages. But where there is difficulty, or a challenge,  there is also opportunity,” says Çakarel.

So how does Çakarel limit risk and open up his business in this area? Part of the preparation appears to be good research and data collection.

“I constantly look at a lot of variables and a lot of data,” he says. “MUBI currently has about five million registered members globally. So there is statistically significant data that shows me the consumer experience and behaviour of people from Argentina, Japan to the US. The data shows me how fast the country is growing, so if i want to take a 20 year bet on a country, what is the macroeconomic situation?”

“I look at how young the population is and how media savvy they are,” he continues. “Then I look at business metrics like the existing level of competition, how expensive the content is there and when you look at all of these variables there are some very interesting countries in the world like Turkey, Poland, Russia, Mexico and Korea. You can grow very interesting Internet media companies in these countries.” 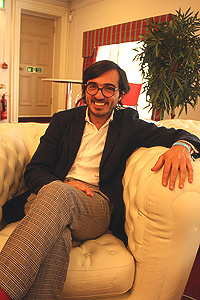 Even with all this data in hand, the problem of creating a video on demand service is complex. “I realised how difficult this business is,” admits Çakarel. “It’s not just launching an app, it’s content. The film rights business is very conservative, maybe five years behind music.”

There is hope though. Companies like Netflix and Lovefilm have made headway in changing user behaviour. Today rather than having to go out and buy or rent a film or television series, viewers are demanding access at home or on the move, direct to their devices. Çakarel feels that this shift is one of the ways in which doors can open to innovation around content on demand.

Although there is an argument that services like this have negative effects on the film industry, especially when it comes to movie theatres, Çakarel feels that there is a difference in the choices people make when they decide to consume film.

The point Çakarel is making is one around distribution. Far from cities and towns, small cinemas have to be choosy and distributors make choices to increase possible profits. This means that films are shown for a few weeks in a particular location and if you miss that time slot, you won’t get to see that film until it arrives on TV or you can buy a DVD. (Unless of course you torrent, but that’s a slightly different audience to traditional viewing habits.)

To offer more viewers the opportunity to watch films, MUBI launched a new business model in the UK. It has a price point of £2.99 per month. For that price, members get a fresh choice each day and the options are available for 30 days. Çakarel first tried the model successfully in Turkey before bringing it to Britain.

Though the pricing is appealing, the choices in each country are limited by the agreements made with film studios. Çakarel feels that there are still barriers in the UK, “Sky has a strong hold on output deals with studios and they have held back rights on the films that can be shown online. Last week in Turkey the film of the day online was The Artist, it could be two years until that film can be shown by LoveFilm or Netflix or MUBI can show that film online in the UK.”

“It makes it hard for VOD to grow in a meaningful way in the UK,” he continues. “It is similar in Germany, and in France you cannot legally show new films online.”

Interestingly this is why emerging markets have the lead on this type of service. Çakarel points out that there is faster growth and penetration for video on demand services in Turkey, Korea, Mexico and Brazil. But there is hope for other countries and that comes back again to consumer behaviour.

“The business will become so important that companies like Sky will have to pay a lot more money in order to hold back rights,” says Çakarel. Basically, consumers will be willing to pay video on demand services enough that keeping a film offline for so long will become an expensive proposition.

Meeting the European and non-US markets might seem like a hard task for companies looking at global expansion. But it seems that with a clear problem to solve and the right data, the risks can be mitigated. So there’s hope for this fragmented continent yet when it comes to receiving innovative services.