LeWeb, the conference better known for it’s location in Paris, has hopped the channel and set up camp in Westminster, London.

The Central Westminster Hall is a glorious edifice that fits in naturally to the surrounding historical buildings in this part of the city. Step outside and you can enjoy the view of Westminster Abbey, where the Royal family tends to get hitched.

The main stage at this event has a ridiculously dramatic backdrop. A huge pipe organ is surrounded by LeWeb logos that glow softly in the shadows and occasionally for a good dose of gothic fun, the power cuts out and the speakers and audience are dowsed in darkeness.

Though the theme of the event is ‘Faster than Real Time’ there are also interesting discussions taking place around geography, and not in terms of geolocation.

Europe standing on its own tech

It would be predictable to pit Europe against America in a battle of tech. But anyone who has visited both parts of the world will identify that although there are comparisons, they’re different animals.

European technology is established but is not always a household name. The World Wide Web, the first computers, Voice over IP, all saw some form of genesis in Europe. Now it seems that the UK and Europe is also able to draw big company names who are searching for places to plant their global bases.

Loic Le Meur who organised this event with his wife Geraldine has pursued business on both sides of the Atlantic but he feels that Europe has a great deal to offer. This is somewhat reflected in the figures for attendance and participation at the conference. “60% of participants came here from 50 countries and the rest are from the UK. 600 start ups here applied for our startup competition, we had 800 in Paris.”

So they compete? Today saw Uber and Hailo the mobile cab services go head to head in conversation. Uber has had great success in the USA while Hailo dominates in London.

Le Meur feels that there is reasonable competition but that each serves its own geographical area well. “It would be very difficult for Hailo to work in the US and on the other hand it will be hard for Uber to take hold here in the UK”. There is a hope that this form of healthy competition will breed innovation for the businesses to survive in each other’s territories. 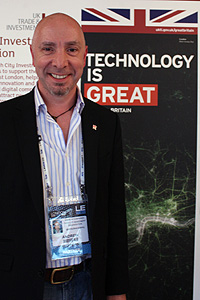 Andrew Humphries works with entrepreneurs in the area of East London known as Tech City. He champions the area and works with start ups in order to work out what their needs are. He feels that the UK is a centre for fashion and technology but that there are many clusters around the country that are proving to show specific strengths.

“We’re seeing really interesting clusters growing up. Cambridge has been a centre for technology for many years but it is also a centre for clean tech and bio engineering, in Manchester and Birmingham you see lots of manufacturing and engineering technologies. In the Malverns around Worcester, we’re seeing a growth of cyber security businesses.”

Humphries also found it notable that 60 per cent of the entrepreneurs at this event came from overseas. So what is it exactly that is drawing them here and other countries in Europe?

Reshma Sohoni, CEO of Seedcamp sees immediately what it is and what she would use to attract foreign businesses for investment and employment. 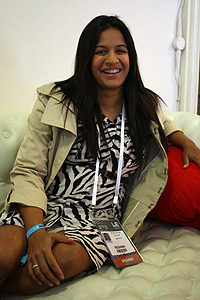 “What’s unique about this region is also what is challenging and that is that it’s fragmented, says Sohoni. “That means that there is talent everywhere. In all the pockets all across Europe in back end, front end and design as well there’s talent. There are great developers that should pull people over.”

There is a lot of optimism and the possibilities of a great deal of venture capital being pumped into businesses like the startups that are competing at LeWeb. But is there really money to invest in Europe when we are seeing proof of economic chaos across the continent?

LeMeur feels that there is plenty of room for businesses to get started and that the barriers to entry are not based around finance in this way. ”

Worries about the current economic crisis? “There is hope,” says Le Meur. “You don’t need money to make a world-wide success. Take a look at Pebble Watch, founder Eric Migicovsky raised ten million dollars without an investor. Though it started in Canada, there is no reason why this cannot happen in Spain, Italy or Portugal.”

With high rates of unemployment and an economic situation that is complicated to say the least, it could be that those countries across the EU that are particularly affected by recession that create the startups that we might see at European conferences in years to come.