This article was published on November 29, 2011

One of the questions that I get asked the most is “what is the next big thing on the Web?”. Usually, when people ask this, they’re trying to find out which company will be hot next, or which app will get our attention for six to twelve months. That’s a short view and not an answer to what the “next Web” looks like, meaning how we’ll use the Internet in three to five years.

Things will change; our interfaces to the Internet will start to alter, our communication styles will continue to evolve. I think I have a pretty good idea of what the next web will look like. It won’t be more services or social networks, it will be more control over the wild west of an Internet that we have today.

Control of data is a big part of the next web. Our data, specifically. We’ve given up a ton of it, and now it’s time to get something in return.

Successful companies know this, and that’s why they’ve been collecting heaps of data over the past ten years. Let’s look at the companies who have the most data, and how they’ll use it to usher us into a more personalized web, where we’re in the driver’s seat.

Facebook has our relationship data and has a pretty good idea of who we are. By analyzing what we like, comment on, and by who we interact with, Facebook could nearly clone some of us with the amount of information and tendencies they’ve learned from us since launching to the free world.

On September 26, 2006, Mark Zuckerberg and company started what would be one of the longest term visions of any company known to man. On that date, the company became available to anyone with an email address. Over years and years, they would collect information about us. And we’d give it to them willingly. Make no mistake about it, Facebook owns at least a part of your digital identity, along with over 800 million other people’s. 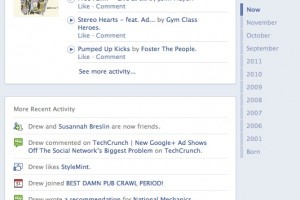 Having said that, you’d think that the next Web involves Facebook advertising to us based on the information we’ve given them. That’s a short-term goal for Facebook. The long-term vision could be an operating system in the cloud that starts with you and ends with you. The feature that will begin giving your data back to you in a presentable way is Timeline, which is yet to be released to the world.

When you install a fresh version of an operating system, there’s nothing there. You have to install software, tinker with settings, and get your environment to your liking. A Facebook operating system doesn’t need any tinkering whatsoever. Facebook knows what you like, what you do, when you do it, and how you do it. The service stores your social brain.

What if a random stranger let you log into their Facebook account? You could get a pretty good idea of who they are pretty quickly based on the friends they have, and the things they’ve interacted with.

One of Facebook’s investors is Microsoft, and its consumer operating system, Windows, should be retired for a more social and web-based experience. Facebook.

To prove my point, ask yourself this. If Facebook had an integrated Web browser, would you really ever have to leave the site? A lot of people would say No.

Twitter will replace texting and take a bite out of email 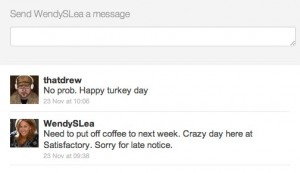 Twitter, the land of goofy trending topics and celebrities, has solidified one thing – brevity. Communicating in 140 characters or less is a trend that will continue, and simply the action of keeping our thoughts brief is something that warrants the $1.16B that Twitter has raised to date.

How many companies and services you can think of have changed the way you communicate? Email, the cell phone, texting, Twitter, and yeah…that’s about it.

Apple integrated Twitter into iOS for a reason, it sees the company as a communication medium that will be around for years.

Since Twitter could take a bite out of email, the service has to eventually give us more control over our data. Personal dashboards that aggregate the contents of our thoughts and tell us things about ourselves that we might not have cognitively known is a perfect example of how Twitter is a part of the next Web. Data in, insights out.

Google will think for us

Google arguably has some of the most valuable data, that being a record of all of the things we search on. Search is one of the most important data points in learning our tendencies. Our aggregated search data can tell us what we’re curious about, what we’re interested in, and what we need to learn more about.

Managing your own data

There’s a pretty good chance that we’ll be getting more out of the data that we put in over the next few years, simply because it’s inevitable. It’s like a relationship, the more you give, the more you expect in return. Nobody likes to be the giver in a relationship that has little or no return. Google’s gift to us right now is free services. Eventually, that simply won’t be enough.

As the government puts more pressure on companies that hold your data hostage, the more data we’ll get back, simply because the services will want to stay out of sticky legal situations.

The next web will also involve a suite of tools that let any person comb through their own data to find out trends about themselves, their friends, and anything else they want to learn from the data they’ve shared and interacted with. Unfortunately, as of today, that’s not something John Q. Internet can do.

I’ve been playing around with a service called ThinkUp lately. It pulls in my Google+, Facebook, and Twitter data. Hosting it all myself on Amazon servers, it gives me bits and pieces of information based on the things I’ve shared and said online. It’s astonishing. Not because the data points are impressive or overly insightful, but because it told me more than the actual services do themselves.

Not only did I learn a thing or two about how I use the Web, but I learned a lot about my friends and followers on those services. Based on what ThinkUp tells me, the most interesting stuff I’ve shared on Facebook, Twitter, and Google+ are the things I would have least expected.

For example, I left a comment that took three seconds of thought, and two seconds to post, and it got the most reaction of anything I did on Facebook all day. Who’d of thunk it?

Here’s a video demonstration of the service:

Data has been a powerful thing for years, driving businesses to huge success and revenue. Insights gathered from data help you predict things and alter current paths. Personal data could do amazing things for our self-awareness, self-education, and help us with our overall self-worth. It could stop us from over-sharing or push us towards a career we would have never planned for ourselves.

While we’re a long way from being able to rewind and review moments that happened in our life, we’re getting closer to it with all of the bits and bytes we leave in our wake on the Internet.

Imagine a day when you turn on your computer or your mobile device, and you’re presented with things to purchase, search for, learn more about, and think about for the day. And more importantly, insight as to why you were shown those things. It’s all right there already, we’ve put the time and effort into giving our data to services, the next Web will let us actually make something of it.