From Runtastic and RunKeeper, to Strava and Nike+ Running, there really is no shortage of GPS fitness-tracking apps out there. So when the good folks at Tribesports announced they were launching their very own incarnation, well, one wondered what they would bring to the table that wasn’t already available across the myriad of existing apps.

Launching initially as a social network for sportie people, Tribesports has evolved into a different beast since then. Yes, there is still the community-based element that lets people network and share inspirations around their favorite sports, but it’s also now a community-powered online sportswear manufacturer and retailer, designed as an alternative to the “overpriced performance sportswear currently available to customers”, as the company puts it.

And while it has previously entered the mobile app fray with what was more or less a direct translation of its existing Web-based network, this latest launch sees the company take a whole new direction.

Hitting the App Store today, with a version for Android due out shortly, we gave Tribesports Training a test-run over the weekend to see what’s what and whether it really brings anything new to the fitness-tracking sphere.

The main central ‘Add’ tab is where things kick off. Here, you can manually add an activity, which includes fitness classes and sports, weight-lifting and everything in between. Anything you do, you can ‘star’ as your favorite – but more on all this later.

First up though, Tribesports Training is entering the GPS fitness-tracking space, which will clearly be a major use-case for this app, be it running, walking or cycling. Hit ‘Start GPS’ and you’ll encounter the first nice introductory feature – you can delay the start of your activity in five-second intervals.

While other apps such as Runtastic do have similar features, Tribesports doesn’t seem to have a time-limit on the delay.

So let’s say you want to launch the tracker but you still have to tie your shoelaces, put your gloves back on and fasten your backpack, you can stipulate exactly how long until the activity starts, giving you enough time to do your necessary preparations.

There are three screens you can scroll during your activity – the first screen simply has a simple distance/time metric, while the second one includes a graph with a breakdown of your splits, and the third one displays a Google Map of your location.

Now, you can pause your activity (e.g. if you get stuck at traffic lights) or end it when you’re done. It’s at this stage you’ll have the option to inform the app of your choice of activity, include a small note, take a photo and choose how you share the data.

So far so good, and based on our tests everything worked well and as described. But it’s nothing particularly groundbreaking, you’ll probably agree. However, the more you use it, the more you realize there are nice little touches – for example you can take photos as you run/cycle.

The more photos you take, the higher the little number will climb next to the camera icon, and when you’re done you can see instantly how many photos you’ve attached to your journey.

Of course, other apps offer this too, but with Runtastic, for example, this requires you to upgrade to a Pro account. RunKeeper also lets you do this for free, but lacks the numerical visual cue telling you how many snaps you’ve taken. So, it’s not a massive feature, but a nice design touch.

You can view all your activity in-app, with your friends and followers able to comment. I initially detected what seemed like a bug here – it displayed each of my activities multiple times as you can see in the image on the left. I’ve been told that this is being fixed at the moment, and a simple refresh (pull ‘down’ from the top) actually solves this issue.

You can click on each activity and view key details such as splits, pace and elevation, which is basically essential data for anyone looking to build an arsenal of all their exercise information. 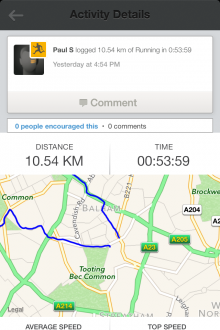 Tribesports Tracking is a pretty good fitness-tracker, but it’s seeking to differentiate itself via a number of conduits. For example, you may wish to do some dumbbell work before your run – Tribesports allows you to log such information manually and in detail.

You can choose from a ton of very specific activities (Acro Dance, anyone?), and save them to your favorites for easy access.

You can enter the number of reps, add notes/photos and save it alongside all your runs, swims and cycles. Additionally, there are thousands of workouts generated by the Tribesports community, so you can get actual instruction on countless exercises and stretches, including ones to improve your strength for running and cycling.

Moreover, you can track your progress and view your training stats as ‘weekly’, ‘monthly’ and ‘all-time’.

It’s early days still, but Tribesports’ entry into the health and fitness-tracking fray is a great first effort and there are many things to be excited about.

For starters, it’s completely free AND ad-free. It promises to remain so too, so you won’t have to shell out any money to procure a new feature. Also, as with other similar services, it’s available via the Web, so you can network with other users, view your training history, stats and more from any computer. And although it’s iOS-only for now, an Android incarnation will be landing soon, so we can’t wait to check that out too.

However, there are missing features. For example, there are no audio cues – if you’re listening to music it can be very handy to have your real-time stats read out to you every KM/5KM/10KM. Plus, there’s no direct link to your music library from within the app – not a massive bummer, but worth noting nonetheless.

Moreover, I would really love to see routes integrated into Tribesports. One of the biggest challenges sometimes with longer runs/cycles is knowing where to go. It can be quite time-consuming researching this manually, and given Tribesports is all about its community, it would be great to see something happen on this front – trails, hills, parks, circuits and everything in between. All ranked and rated, ready for you to click and follow.

While this isn’t an issue for me, I know that a lot of people like to have their dietary data lumped in with their fitness activity. There’s no provision yet for this within Tribesports, but there’s nothing stopping them tapping a third-party API to include this in future – if that’s what its users request.

“Having followed closely the training behaviors of our community of sportspeople over the past two years, we were in a unique position to create an app that served the needs of sportspeople everywhere,” explains Tribesports CEO, Steve Reid. “We weren’t looking to create an app for just runners, just cyclists or just for people who go to the gym. Very few people do just one sport. This is the most complete all-rounder training app available.”

Tribesports wants to be the ultimate fitness and health-tracking service, and it has taken a big step in the right direction with its latest launch. It tracks, analyzes and instructs across multiple disciplines, and all this is underpinned by a 200,000-person strong community of users. It’s onto something good, but there is still a long way to go before it can lay claim to anything too lofty.

We’ll be keeping an eye on this one for sure though.