Announced right along side the rest of the features of iOS 5, iMessage took on the appearance of just another aspect of Apple’s new OS. A convenience feature or marketing tool, much the way in which Facetime was received at its announcement with iOS 4.

But iMessage is actually a very stealthy and potentially incredibly disruptive system. It could very well shift the balance of power in Apple’s ongoing war to democratize carrier choice.

iMessage is basically a messaging protocol that is used to allow users of iOS devices to text message one another. It is similar to the popular BBM service used by BlackBerry owners in that is a cross device (but in-platform) service that features read receipts and typing indicators, but differs in that it is a point-to-point service that does not require an intermediary server. Instead it uses Apple’s push notification system to establish a connection and handles the communication between the two devices.

The stealthy aspect of it lies in the fact that it is not its own app. Instead, it is integrated directly into the Messages app on iPhone, iPad and iPod touch.

The Messages app is, of course, new to the iPod touch and iPad, but the iPhone has used this as the place to send picture, video and text messages since iOS 4, when it was renamed. This remains constant as you can still send any of those kinds of messages out to any mobile phone. 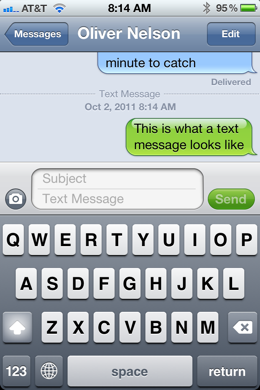 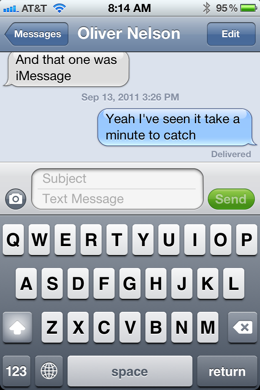 The difference now comes in that there are two modes used for sending. There is the normal mode, in which your text bubbles are green. This is your normal SMS/MMS mode and you will se this when messaging any phone that is not an iPhone or any iPhone that is not on iOS 5.

If the iPhone, or iPad or iPod touch, is on iOS 5 however, you will see a blue bubble instead and the ‘send’ box will display a faint ‘iMessage’ text.

When you’re in this mode, you can send message to any iPhone user, iPad user or iPod touch user on iOS 5 completely free. This is what we like to call a ‘very big deal’. You can thank this tectonic change for the recent policy change by AT&T to limit text message plans to ‘pay per text’ and unlimited. It needs to get its pound of flesh somehow.

When typing an iMessage, it works exactly as any other message does and yes, you can send pictures and videos through the service, also free of charge. For those of you addicted to Cinematographs, iMessage also supports animated GIFs.

If you’re on the receiving end of a message, you can choose to turn on read receipts which will add a small notice under the last message on the senders phone letting them know that you have read it. Regardless, you will always be notified that it has been received by the other device properly.

If you happen to still be looking at the conversation when the other party replies, you will even get a ‘typing’ symbol that tells you the other person is in the process of crafting a reply.

On an iPad or iPod touch, the service is used by assigning it an email address and advising people to message you at that email. Once you’ve linked an email any messages sent to either your phone number (if you have an iPhone) or that email address will get sent to all of your devices so that your conversation is kept up to date on any of them. 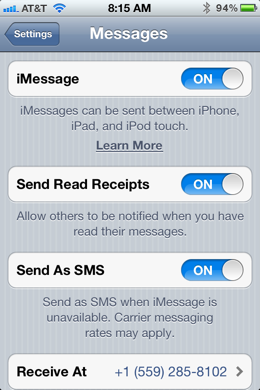 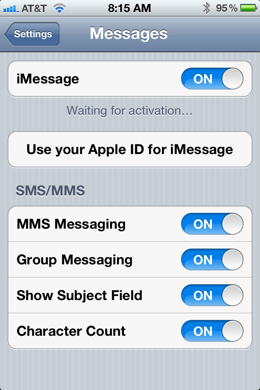 One difference is the way that push notifications are handled. In my testing whatever device was used last seems to get pushed message alerts the most regularly. I saw some other ideas floated that played around with the way that Apple assigned priority but the ‘device with the least idle time’ seemed to be the most likely result.

The settings for iMessage will allow you to disable the service entirely if you would like to for some odd reason. It will also allow you to enable or disable falling back to sending an iMessage as an SMS when it fails as an iMessage. Note that this does not disable sending SMS messages, it only prevents iOS from sending your iMessage as a regular text message if you initiate it and then it fails. If the text input field says ‘Text message’ to begin with, then it will just send a text message.

Being able to message someone on the iPhone, then continue the conversation seamlessly on an iPad is very cool. It is especially nice in the evenings when I am more likely to have iPad in hand rather than iPhone.

None of this is very new, as IM clients have been doing it for years. It is a nice improvement to the way that iOS messaging works though and should be a very nice bonus for those that find themselves messaging other iPhone users most of the time.

Without any intervention by the user, they will find themselves automatically saving money on messaging whenever they’re doing so to fellow iPhone users. That is pretty powerful.