This article was published on December 26, 2016

2016 was a great year for smartphones. In fact, I can’t remember a year where almost every phone released was so consistently not bad. As such, it doesn’t make much sense to call out a single “best” phone of 2016.

(If I had to pick one, it would have been the Note 7… but we all know how that turned out.)

Still, there are great phones for everyone out there, depending on your needs.

Look, I’ve been team Android since day one. But when it comes to recommending a phone for the person who wants nothing more than a smartphone that does its job, the iPhone 7 is still safest.

iOS 10 makes the iPhone more powerful than ever, without losing out on its simplicity, and the dual camera on the Plus model has a unique portrait setup. Meanwhile, the 4.7-inch iPhone 7 also remains one of the very few small phones that provides top-of-the line performance. Its camera is still among the best in its class, and the device is now more derp-proof thanks to water resistance.

It feels like ages since the Galaxy S7 was released back in March, but the Galaxy S7 – the Edge version in particular – gets almost everything right.

It has a superb camera, excellent battery life (particularly in the Exynos version), a microSD slot, and waterproofing all packed in a body that’s much smaller than your average 5.5-inch phone.

It may not have been the most unique phone this year, but it’s arguably the most well-rounded (literally). And if you prefer something smaller, there’s always the non-curved version.

Android took a huge leap this year when Google announced it was entering the smartphone hardware market with its Pixel phones. Top of the line performance, the best AI assistance, and possibly the best smartphone camera out there make it a top contender, and has us looking forward to what Google will offer in the years to come.

Though it doesn’t come with a removable battery, the battery pack Mods are arguably a better solution. With the option of a pico projector, an excellent speaker, a better camera, and the promise of many mods to come over the next couple of years, no other phone released in 2016 was quite as versatile.

The lightweight software helped the Z be one the first phones to receive an update to Android Nougat, and made it the first non-Google phone with Daydream VR support. It’s just a shame the Force variant is a Verizon exclusive.

You have to hand it to LG. When everyone other flagship series has given up on a removable battery, both LG’s G5 and V20 were the only high end releases this year to keep up the old ways.

The V20 also comes with a useful secondary display, a giant 5.7 inch screen, solid performance, and Nougat out of the box (albeit without Daydream support so far). It also features the very best headphone and microphone performance on the market, as well the most robust manual controls for video and stills I’ve seen.

The OnePlus 3T feels every bit like a premium phone. It has better specs than almost every phone released in 2016, despite costing only $429. It has top-notch battery life. It has a vibrant, bright screen. And it has an arguably improved take on stock Android. The only complaint about it is that it doesn’t offer much in the way of unique features other than its low price.

This was a really tough one. While the OnePlus 3T ultimately won out because of its cleaner software experience, better battery, and added polish, the Axon 7 is arguably the more interesting device. It features some of the best speakers and headphone audio on the market – including over pricier phones – a high resolution display, and unique design. It also works with CDMA carriers.

Really, my only qualm with the Axon7 is that its stock-looking UI is a actually a bit too bloated, and its camera a bit worse than the 3T, but overall its right up there with the best of the best.

This perhaps shouldn’t come as a surprise given Motorola has dominated the ~$200 phone range for a while now, but the Moto G4 is a truly excellent device. Performance rarely betrayed its midrange specs, the camera (on the G4 Plus, in particular) was comparable to some higher-end devices, and the 5.5-inch 1080p screen is nothing to scoff at. Design is kind of plain, but for $200, we can live for it.

Though 3000 mAh isn’t a huge battery for a 5.5-inch phone, the Moto G4 managed solid battery life, and the microSD card slot is a welcome inclusion for upgradability. Couple this with nearly stock Android, and Motorola has crafted an excellent device. That there are cheaper and higher end variants help you pick the right one for your needs too (the G4 Play and Plus, respectively)

ZTE’s Axon 7 Mini feels every bit the premium device its larger sibling is, and both the speakers and headphone output are actually slightly improved. Though the camera, processor, RAM and storage are downgraded, they’re right in line with the Axon 7 Mini’s current $250 price.

In terms of build and features, the Axon 7 Mini is miles ahead of the Moto G4, it’s just let down a bit by overbearing software which mars performance and battery life a bit over the G4.

Samsung wins this by default by having the stuffing the largest screens into the smallest frames. The smaller S7 is just as good as the S7 edge, it’s just slightly less fancy looking, and has slightly worse battery life.

The HTC 10 made up for its lackluster predecessors. It’s a phone that was hard to complain about, with solid, understated design, a good camera, and excellent speakers and headphone output. Its lightweight Android skin was also welcome, mostly only including useful features, with almost no duplicate apps. 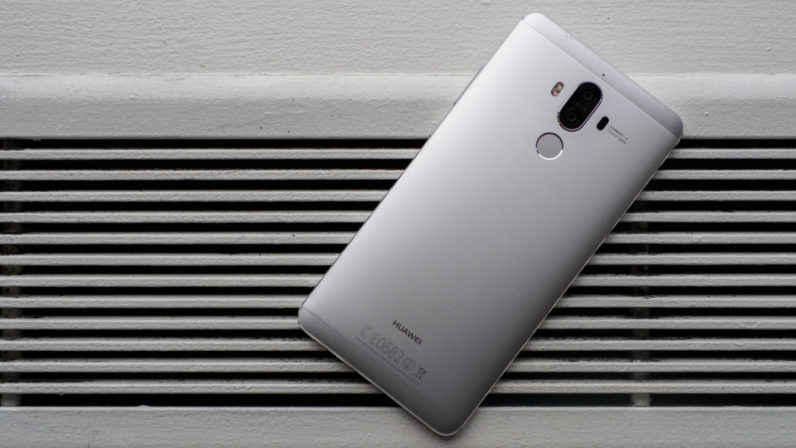 2016 stretched the definition of the phablet, and with the Note 7 banished to tech limbo, the Huawei Mate 9 stands out as the best overall big phone.

Its small bezels means Huawei can stuff a huge, gorgeous 5.9-inch display into a frame slightly smaller than the 5.7-inch LG V20, pretty much obviating the need for a tablet. Add in the excellent dual-camera setup, powerful stereo speakers, and a gigantic 4,000 mAh battery than can power through two days, the Mate 9 gets almost everything right.

It also features clever machine learning optimizations in order to keep the phone running smoothly over long periods of time. Though we haven’t had the phone long enough to truly verify that claim, the phone runs smoother that any device I’ve used outside of an iPhone or Pixel, which is impressive for a phone so heavily skinned – even if it’s running Nougat out the box

We explained what makes the V20 so great above, and it’s worth noting that though the main screen is technically 5.7 inches, the phone is really more like a 5.9-inch device when you factor in the secondary display. But since you can use that space for media, the Mate 9 stands out a bit more as a true big-screen device.