Timeful, a calendar app for the iPhone that uses behavioral science to help you optimize your schedule, has received a major update with smart notifications and new options for its habit recommendation feature.

You’ll now be able to schedule a habit multiple times in a day, so you can remind yourself to do things like drink water or stretch at your desk. Timeful has also added specific habit categories, such as Wellness and Fun.

Since launching in July, Timeful has seen users complete more than 1 million to-do items and habits in its app.

Timeful’s new proactive notifications take advantage of the actions available in iOS 8, allowing you to immediately check off to-do reminders as they come up. The goal is to make Timeful more valuable by nudging you about habits you’re trying form, even when you haven’t opened the app yet that day. 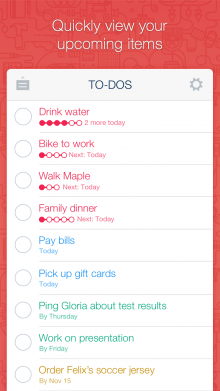 When I asked Timeful CEO Jacob Bank how successful the company has been at helping users stick to new habits, he answered that he gets multiple emails a day from users who are excited about finding an app that finally helps them make time for tasks like reading and exercising.

Bank also noted that several ADHD patients have said the app’s scheduling system has made them noticeably more productive.

Timeful relies on what it calls an “intention genome” to calculate out when to schedule your to-do list items for you. It then learns your preference in order to prioritize the tasks you want to get done during your most productive hours. Over time, the app should get smarter and become more like a personal assistant.

When you first start using Timeful, it bases its recommendations on global data around when other people like to perform a certain activity. However, if you repeatedly schedule working out during your lunch break, the app will start to suggest it for you. Moving forward, Timeful is interested in tapping additional data, such as your sleep schedule in HealthKit, in order to offer better suggestions about how your schedule affects your overall well-being.