It was an intriguing-sounding proposition, and one that we can now get a clearer picture of with its launch today.

FastFT’s tagline is ‘market-moving news and views, 24-hours a day’. Its core raison d’être is to serve up live commentary and up-to-the-minute contextualized reporting on significant market events.

To access FastFT you will need to be signed-in to FT.com. The service is free to subscribers, but access is also available to all (free) registered users as part of their eight monthly articles allowance.

FastFT is managed round-the-clock by a team of journalists based in London, Hong Kong and New York. Given that its main focus is the markets, it only operates Monday-through-Friday, but it is supplemented with ‘exclusive’ content – so this promises to be more than a copy-paste job of stories from the online/print editions of the FT.

FastFT is essentially a stream of tweet-like messages consisting of a headline and a summary.

It’s difficult to avoid the Twitter comparison, but looks can be deceiving – this comparison is superficial. Sure, FastFT updates in real-time, and there’s short summaries for the concentration-challenged folk out there, but the FT brings context to the headlines and summaries. Each story can be expanded by clicking on ‘Open’.


Each piece comes tagged with a topic – this could be ‘Markets’, ‘Economy’, ‘Comment’ or ‘Companies’. You can navigate to each topic by clicking on this tag, or you can enter keywords in the search box at the top. The idea behind FastFT is that it doesn’t replace its existing reportage, merely it sits alongside its news, blogs, columns, videos and so on. Given it works across mobile too, it will probably appeal specifically to those on the move and it does bring additional value beyond simply following an FT Twitter feed. It doesn’t link through to articles, everything is presented within the feed. 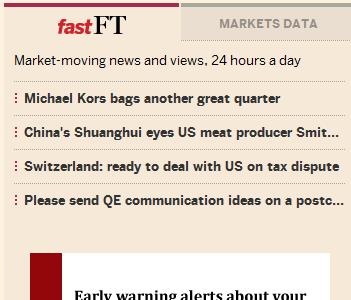 Although FastFT sits on its own dedicated Web page, it also appears on the main homepage in a box on the right, though it would make sense if this was made available on all FT pages – this would certainly increase its visibility.

“The ever increasing diversity in the way that our readers want to consume our content has created a demand for short, highly portable content that can be rapidly published in virtually any media channel or platform in its full original form,” explains Andrew Betts, co-founder of FT Labs.

“FastFT is the visible tip of a new real-time, platform agnostic publishing system that represents a step forward in creating an environment optimised for all news consumers, whichever device they choose to read us on, and wherever they happen to be,” he continues.

FastFT is available for subscribers now. Meanwhile, check out the official promo video below.