Tango, the mobile messaging app firm that recently raised a $280 million funding round led by China’s Alibaba, is the latest chat app to make a big mobile gaming push after it announced a new $25 million fund dedicated to games.

Money from the fund, which the company says is a first for a messaging company, will predominantly be used to pay for marketing and promotions for companies that build games for the Tango platform. Launched last year, Tango’s games service takes its cue from Asian messaging apps, leveraging user friendship graphs to allow them to share scores, run leaderboards, battle each other and more. 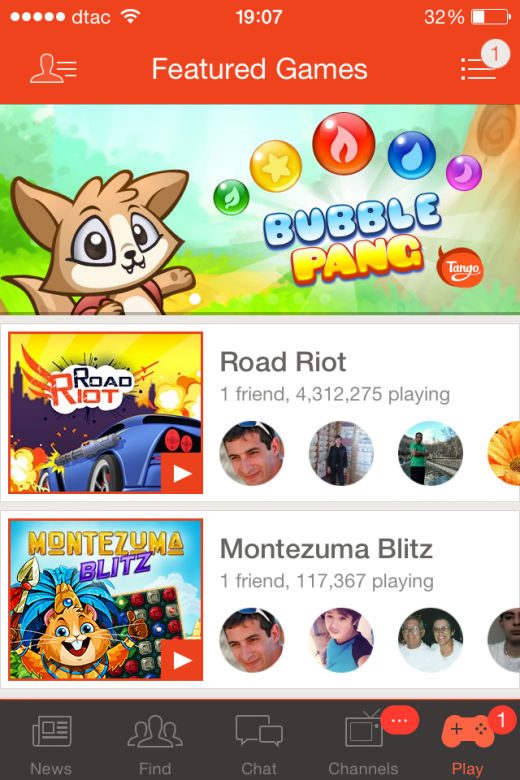 To execute its focus on gaming, Tango has hired Jim Ying, formerly of mobile games firm GREE, as its first vice president of games publishing.

Ying told TNW in an interview that the fund will help promote apps outside of the Tango ecosystem, i.e. via Facebook ads, and could also be used to invest in gaming companies, and maybe even for acquisitions, Ying said.

Tango believes that its gaming strategy can help developers find audiences for their apps, monetize their games more efficiently, and use the service’s viral hooks to tap into its 200 million registered users — 25 million of whom are active on a daily basis, according to Ying.

In return it hopes that games, which can be played by anyone but are optimized for users who log in using a Tango ID, will drive new users to discover the chat app and get hooked on it.

GREE, Kabam, DeNA and other mobile games companies buy ad inventories — but, to date, Tango hasn’t really done that. However, since we want to partner with the best developers and support them, we know that isn’t just about exposing their games to our users, but also to help promote the titles. We see the Western markets as a big opportunity, particularly in terms of gaming.

Japan’s Line makes 60 percent of its fast-growing revenues from games. Tango does not provide similar financial details, but Ying highlighted iOS and Android game Road Riot as an example of what is possible. He claims the Tango-optimized version of the title does well with Tango’s viral mechanisms, and has around 550,000 daily users. Plugging it into the messaging app has lifted user engagement by two or three-fold compared to the original standalone version of the game, he added.

Right now, Tango offers more than 35 connected games, with between two and four new titles arriving each month. The SDK has been kept private in order to allow Tango to be highly selective over the type of games that it takes on, Ying said, and he confirmed that a “focus on high quality games” will continue.

Like Line and WeChat’s gaming platforms, Tango games are often selected from existing standalone titles, and then repackaged to take advantage of the Tango games platform SDK. Now that the fund is in place, Ying is optimistic that Tango-first games will emerge as exclusives for the chat app, which could help boost its appeal in North America and other markets.

One of the biggest drivers is that messaging apps [worldwide] is that they replaces SMS, but that is free [for many people] with basic plans in the US which makes it less of a driver. For messaging apps to be successful, you need to deliver value beyond just SMS. We’ve introduced music, channels and now games — these are types of content that will engage users and help expose more people to what Tango can provide.

Tango’s move comes at an interesting time. Facebook is increasing its focus on mobile games — albeit while positioning itself as a platform for discovery, not a games service itself — while executives at Line recently told TNW that the company is planning a major push into the US market focusing on… you guessed it… casual mobile games. Sources at Tencent have also told TNW that it is making a big push with its WeChat gaming platform in North America.

Despite raising large amounts of money and claiming 70 million monthly active users, Tango is an also-ran in every market worldwide. The company claims that it has 50 million registered users in the US, which makes it its largest market worldwide, but competition there is particularly intense — Kik, Snapchat and Facebook Messenger almost certainly have more users there.

Earlier this year, I outlined the potential that casual games like Flappy Bird could have for messaging services (Tango actually has its own clone: Snappy Hunt.) It’s clear that Tango sees the potential. It could be a win for developers — who can benefit from better discoverability, engagement and monetization via the app — and the company itself as a way to bring in new users.

In reality, however, gamers often have little loyalty to publishers and their interest in titles can be short. That puts pressure on a steady flow of addictive titles, which is no easy feat.

Given that Tango is the first messaging app company to really double down on gaming, it is likely to be the guinea pig here. It’ll be fascinating to see how it gets on.