Video messaging service Tango has taken a big step into the mobile entertainment and gaming space after it launched a new content platform for developers, alongside launch partner Gameloft.

Available for iOS and Android, Tango has 120 million registered users, of which half are based in the US, and clocks around 250,000 downloads per day.

The service lets users send free text chat messages and share multimedia, as is standard for many apps, but video calls are its forte. It was among the first to offer video calling on mobile, and that helped it notch 1 million downloads within its first 10 days back in October 2010.

It has been offering a few, basic in-call games for some while, and — after seeing users log upwards of 20 million game sessions per month — it is pushing beyond that with the launch of a dedicated platform SDK for developers and a commitment to quality gaming.

“We have married messaging with entertainment, moving us closer to our goal of becoming a destination for family and friends. Using the platform, our members can move beyond messaging to discover and share entertaining content we now offer,” Uri Raz, Tango co-founder and CEO said in a statement.

Tango is giving developers social hooks to encourage word of their game to spread and higher engagement levels. Gamers will log-in using their Tango ID, and are able to share scores, invite others to play or download games and more — per the example below.

Revenue generated will be shared between Tango and the developer, with Apple/Google taking their standard cut where applicable.

Co-founder and CTO Eric Setton told TNW that the company is taking its lead directly from Line and Kakao Talk in Asia, and aims to take first mover advantage in North America.

“We’re excited to be the first to launch a dedicated games platform in the West,” Setton said. He says he has closely followed the success of Line — which posted $58 million in revenue for Q1 2013 and saw its Line Game platform pass 100 million cumulative game downloads — and Kakao Talk, which sees $30 million pass across its games platform per month. 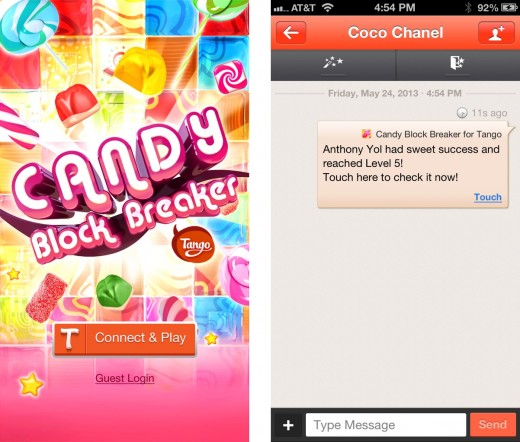 The aforementioned platforms also adopt the ‘social layer’ approach that Tango is betting on. Buoyed by their success — and the failure of Facebook to convert its desktop gaming clout to mobile — Tango is offering something different for developers targeting markets in the West.

Setton believes that gaming “will be the model for the messaging industry” going forward.

“Charging nominal fees caps your revenue,” he added, referring to the subscription-based pricing model of WhatsApp and other rivals, before going on to explain why Tango is pushing into content.

“People are spending a lot of time in messaging apps because they are well suited to their phone,” Setton said. “When users come back [to apps] regularly, you can give them more things do, and that is encroaching on social networks.”

That encroachment is clearest in Asia, where the top chat apps have more registered users than Facebook in Japan and Korea, and are not far behind in other countries in the region.

From a developer perspective, in supplying a regular and engaged audience, Setton believes Tango is massively boosting app discovery. That, he says, addresses a major area of concern for many app-makers.

“App discovery is one of the biggest issues to crack [in mobile]. There are hundreds of thousands of apps from app makers that are dying for attention.”

Setton says Tango is “humbled and excited” to be working with a high-calibre launch partner like Gameloft. The deal represents the first time Gameloft has partnered with a messaging firm.

“On a monthly basis, Tango members play over 20 million games with just a handful of titles, so working with the company will allow us to reach a broad and engaged audience,” said Gameloft VP of Publishing Baudouin Corman. 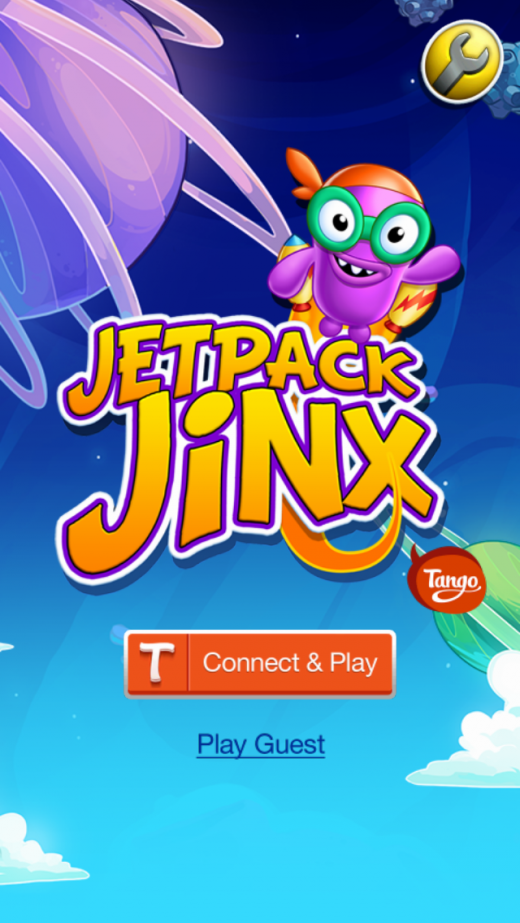 Tango’s move into games comes as Kik, another messaging service with the bulk of its users in North America, prepares to make a similar move after launching an HTML5-based content platform. Tango is also introducing games before Kakao Talk, Line and WeChat — which is tipped to offer them soon — strike it big in the US.

The three companies have picked up large user bases from Asia — Tencent-owned WeChat has more than 300 million, Line more than 150 million and Kakao Talk 90 million — and each is at a different, but early, stage of building its brand in the US.

Setton tells TNW that Tango is working with around a dozen partners — including Australia-based Bubble Gum Interactive — to provide content. The target is to get 40-100 games live on the platform by the end of 2013.

As well as supporting big firms like Gameloft, Setton says Tango is committed to working with smaller players. It is helping by powering back-end services for fledgling companies to “remove the burden” so they can focus on content development.

The first Tango games are available for iOS users right away, with support for Android following in July. Bubble Gum Interactive’s ‘JetPack Jinx for Tango’ is available today, while Gameloft’s ‘Candy Block Breaker for Tango’ is due imminently.