Starbucks is set to expand its Pick of the Week program, which offers customers a free app or piece of digital content when they visit one of its stores, to include in-store downloads through its own iOS app.

The update, reported by CNET, will give users the chance to download a free app or book through the Starbucks iOS app and in-store Wi-Fi network, without the use of physical printed cards.

It’s a small, but significant step forward for the coffee retailer, as it removes the need for redemption codes and encourages further engagement with its official app, which already offers Passbook payments, Starbucks Rewards and a map for finding nearby stores. 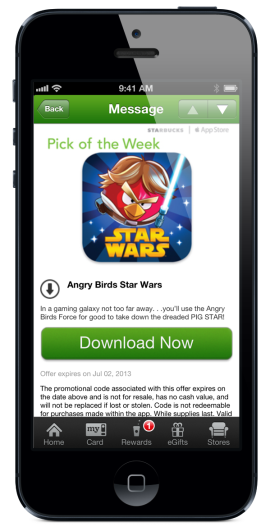 “This expansion, of adding apps and books, is the reflection of Starbucks and Apple working together to strengthen the relationship for customers,” Starbucks Chief Digital Officer Adam Brotman reportedly said. “This is another step in the direction that we’re going to integrate more things into our mobile application.”

Angry Birds Star Wars, the latest mobile video game from hit developer Rovio, will be the first title to take advantage of the in-app functionality.

There’s no word yet on whether the service will ever be expanded to Starbuck’s Android app, however. Ever since Pick of the Week launched back in 2008, the printed cards have been exclusively for content available in iTunes or the App Store. Creating a similar partnership with Google and the Google Play store would be an obvious step forward, it seems.

It’s unclear whether the printed cards will be discontinued, or if they will be offered simultaneously with the in-app downloads. Either way, it’s nice to know that you’ll never have to worry about reaching the counter only to find that the last card has been taken, or forgetting it completely when leaving the store.

Starbucks has been proactive in embracing technology at every turn. Earlier this year it began selling Square Mobile Card Readers in its 7,000 stores across the United States, and has also partnered with The New York Times to offer its customers up to 15 free articles each day on NYTimes.com.