A lot has been said about SOPA, the Stop Online Piracy Act. On a macro scale, everyone understands it to be a bill that can help prevent piracy of intellectual property. But when you look closer, there’s a lot of scary language to it that some have said could effectively build an Internet firewall around the United States.

But there’s a lot more to SOPA than meets the eye, and there’s a lot of unnecessary hype about the bill. That said, it’s time to look at the text of the bill itself, to read it as it is written (PDF link), and hopefully gain some necessary knowledge.

Before I start, however, I have to say that I’m vehemently opposed to SOPA, as well as its ugly brother PROTECT-IP. While they might be well-intentioned pieces of legislation, they’ve been pushed through by all of the wrong people and they both include language that is far too broad-reaching to be good. But there have been lots of articles written about how SOPA is going to be the death of the Internet (and your favorite sites, too!) and that’s not exactly the truth.

So what is the truth? First, you have to actually read the bill. This is something that far too few people have done, opting instead to take overblown reactions and give them even more steam. Secondarily, you have to understand that a bill is written like a legal document. As such, parts can be more or less “scary” depending on how they’re worded. But it is specifically that wording which negates a lot of the inflated stories, so let’s look.

The first thing to note is that there is a dichotomy that is distinguished early in the bill, within the section of definitions. That dichotomy is between foreign and domestic websites, emphasizing that a “domestic website” is defined as either a site that is registered by a US-based registrar, or hosted on an IP that is assigned to the United States.

It’s worth mentioning that this is where terms such as “including” and “and” are highly important. “And” means that more than one thing must happen in order for something else to be correct. “Including” means that it includes one thing, but is not limited to that one thing. Yes, we’re talking semantics here, but semantics are paramount in legalese.

Now why is all of this important? One huge reason – SOPA does not apply to sites that are defined as domestic. So by that definition The Next Web is a domestic site in the US, as we are hosted on a US-assigned IP, even though our company is based out of Amsterdam and our domain registration was handled by a “foreign” registrar. Reddit? Domestic. YouTube? Domestic.

Because these sites (and many others) are defined as domestic, they are completely exempt from SOPA as it reads today.

As such it’s somewhat surprising that Go Daddy got the heat that it did for supporting SOPA, while being exempt to it. It was far from alone in its exemption, yet nobody wants to mention that fact. Again, I’m not defending Go Daddy here, but unfair is unfair.

But what about special circumstances, such as user-generated content? This is where things get a bit sticky, and again it comes down to definitions. The company that has to be deadly afraid of SOPA is Google, not something like Reddit, because SOPA lays out special restrictions on search engines, payment providers and advertising networks. So unless Reddit gets classified as a search engine, payment provider or ad network by some long stretch, it would be insanely difficult for it to ever fall under the jurisdiction of SOPA regulation.

The world of search is all about the index. If you provide better results, you will get the traffic (ideally). But under SOPA, Google, Bing et al would be required to de-index sites that fall afoul of the law. As such, Google could, for the first time, have true competition because of being forced to have a less-complete set of results than a search provider from outside of the US.

The other area where things get messy is that search and advertising go hand in hand. Ad networks will now bear the burden of removing advertising from offending, foreign websites. Again, you can see why Google, with its AdWords product, is uncomfortable.

What About Go Daddy?

Why does Go Daddy love SOPA? The Cliff’s Notes version of the story goes like this – In the United States, Go Daddy is at least ten times as large as its nearest competitor in the market of domain registrations. Clearly, when it becomes highly beneficial to register a domain via a US-based registrar, Go Daddy can see a potential benefit. Further to that, it offers hosting services, so it can attack the foreign competition on two fronts. 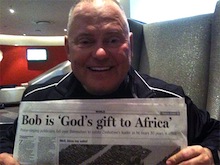 Previously, foreign registrars had been touting the fact that registering a domain through them would protect a site owner from US laws. While that is still the case, SOPA would turn the tables somewhat by preventing access to sites that are not protected as “domestic”. When you’re talking about the United States, which holds the #2 ranking in online traffic (second only to China), that’s a potentially huge loss for any site.

In effect, SOPA would create a legal, worldwide monopoly for Go Daddy as the premiere US-based registrar. Yes, there would be other players still in the space, but size alone is enough to keep Go Daddy as the frontrunner for quite some time.

In the end, SOPA is still dangerous, and it’s still entirely too broad. But there’s a lot of insanity out there. So before you go writing your Congressional representative and throwing a fit, take some time to educate yourself. If you’re presenting a flawed argument, you’re doing a favor to nobody, least of all yourself.

We’re also nowhere near out of the water. Even if SOPA fails, we’re still up against PIPA. With supporters like Microsoft and others, it’s every bit as scary, dangerous and potentially harmful to our open Internet.