Today at a gaming event in New York City, Sony announced the PlayStation 4. Sony’s Andy House says that it is the ‘most powerful platform ever’.

Of note: Images of the console itself, its pricing or its availability beyond ‘Holiday 2013’ were not announced at this event. That seems almost unconscionably obtuse of the company in this day and age. But that’s the tactic that they’re going with and it’s pretty obvious that there are some details about the product itself and the pricing that have yet to be finalized.

“The living room is no longer the center of the PlayStation universe, the gamer is,” says House. “Every facet of PlayStation will continue to become more powerful…and remains at the heart of everything we create.”

Sony’s Mark Cerny then took the stage to talk about the upgraded console and how the PlayStation ecosystem could be integrated into other platforms like the Vita, as well as smartphones and tablets. He spoke about the way that all of the consoles before have been a ‘single purpose’ device.

“The need to radically customize technology can interfere with the innovation necessary ” to develop a platform like PlayStation, says Cerny. He also spoke about the importance of developers, and how Sony reached out to them to create a ‘platform by game creators, for game creators’. This speaks to the way that Sony altered the architecture of the PS4.

The machine runs on standard PC hardware. An x86 processor similar to those used in many windows machines, a standard (though customized) graphics processor and GDDR5 memory. The 8-core processor and GPU are unified, providing 170GPBS bandwidth.

The PS4 will include a Blu-ray/DVD drive, as well as USB 3.0, Ethernet and Bluetooth. 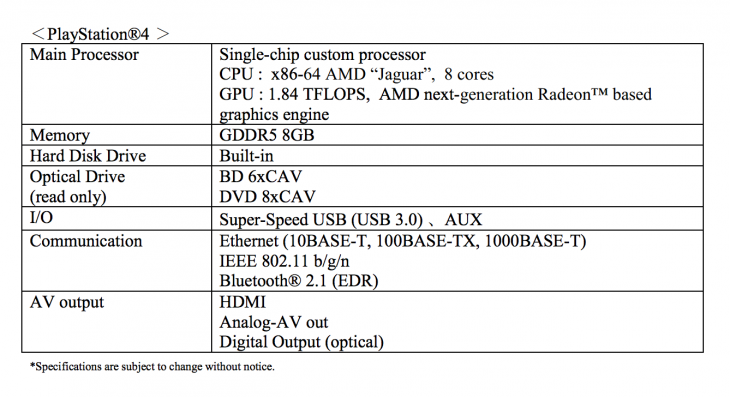 The new system uses a DualShock 4 controller with a touchpad, share button, lightbar and headphone jack. The lightbar mates with a camera system on the PS4 that allows the console to track the depth (distance away) of the player.

There is background uploading and downloading, allowing the console to update game and system items in the background even if the main power is off. Digital titles can even be played while they are being downloaded. This is a huge upgrade over the PS3 which was famous for its lame handling of system updates which set game play back by tens of minutes every time you fired up the console while it updates.

This is enabled by a secondary processor that allows for background work while the main processor is handling gameplay.

That promise is pretty wild, actually, and a bit creepy. Though if it works it would be brilliant.

Next up is Gaikai founder Dave Perry, the head of a company Sony purchased last year that allows for heavy compression and streaming of titles.

Gaikai technology will allow you to ‘instantly experience’ any title that you’d like to try. Basically you’ll be able to try out any game demo you like and buy it if you like playing with it. This means that you can choose and play any title online, streaming it nearly instantly before you have to buy it.

Gaikai’s technology is also behind the spectating feature of the PS4 which allows you to share your gaming session with a button push and allows friends to jump in and take over control to help you. Some games will allow people to give you items that will help you in game play like ‘health potions’.

You can also use Remote Play to transfer a PS4 game over to the PlayStation Vita for remote play sessions, similar to the Wii U. Perry says that the long-term goal is to allow any PS4 game to be played on the Vita, though only some titles will work currently.

Perry says that Sony’s long term goal is to allow all PlayStation one, 2, 3 and 4 games to play on any of those devices using Gaikai technology. This would be done by streaming those games onto the platform. This, says Perry, will require the ‘fastest network anywhere’ and that it is being built now. This would theoretically allow you to play any PlayStation game ever on your current console.

Sony then showed a video featuring many game developers talking about the PS4, specifically the amount of time that it takes for players to get involved in games and to boot up their consoles. These developers want people to be able to ‘get into the game’ more quickly. But it was also interesting that they focused so much on these developers, indicating an interesting note of admission that there should be a cleaner, tighter way for them to get their games out to users quickly via the PlayStation.

Several games were announced at the event, including a title called Knack, which we’ve covered here.

Sony also showed a game by Braid creator Jonathan Blow called The Witness. It looks to be a Myst-like adventure game. During the PS4 launch window, it will only be available on PS4.

And there was also a new Killzone title called Killzone: Shadowfall:

And a new game from Sucker Punch, Infamous: Second Son:

Pricing, availability and other things unsaid

In this announcement, Sony clearly showed that it was targeting the ‘gamers’ out there, rather than Microsoft’s more general push towards capturing household entertainment at large. There were some nods to streaming services like Netflix and more, but the overall presentation seemed oddly focused on the gaming aspects of a ‘living room PC’ when the rest of the industry is branching out from there.

Some notes about the developer focus felt good, as Sony was clearly listening to them on launch times and updates, etc. There may even be some advancements in the way that independent developers generate and submit games, due to the more standard architecture of the PS4 and the heavy focus on digital delivery. Still, no announcements were made about that specifically, so that’s just conjecture.

And that’s about it for the Sony event. Unfortunately, with no picture of the console, pricing or availability beyond ‘holiday 2013’, it’s hard to make any judgements at this point. Stay tuned I suppose.