Shazam, the music discovery and tagging service, has rolled out a major new update to its iOS app, introducing a single universal app for iPhone, iPad and iPod touch, as well as a slew of other new features specifically for the tablet version.

Shazam has become one of the most well-known music-tagging apps, letting users identify the name of a song or artist that’s playing in the background, simply by activating the app on their smartphone. These tags are stored on a user’s device, and lets them stream or download the song elsewhere when they find the time.

In addition to the new universal app, Shazam for iPad now features auto-tagging which means it will recognize and tag music that’s playing around you. So, you no longer have to hit the big Shazam button, you simply tap ‘Auto Tagging’ in the top-right of the screen, and it will work even when the app is minimized.

Moreover, if you don’t want to auto-tag, the Shazam button is now available on each screen so you don’t have to navigate back ‘home’ to tag. You’ll see the button at the bottom right of each screen you’re on.

Another significant addition here is interactive maps, which lets you see the most tagged tracks where you live.

Shazam has gone the extra mile with this feature, as it also lets you scroll a map of the world and zoom in and see what’s popular not only by country…

…but by city too. Above, you could click on any country and see what’s hot, and below you can see how I’ve zoomed in on Krakow, Poland for a closer look.

Other updates include a dynamic new home screen that lets you browse real-time updates of what’s being tagged on TV just now, though this is available for US-users only at the moment. 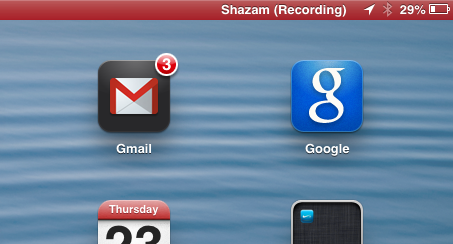 These are significant updates for Shazam – when the auto-tagging feature is activated, and when you’re in a place with lots of music playing that you’d like to ‘record’ to check out later, you now can do. You’ll see the ‘Shazam (Recording)’ message at the top of your screen.

Whilst Shazam is perhaps best known for its music discovery technology, Shazam’s expansion into television has opened the door to new opportunities for the company, letting viewers engage with TV shows and ads for additional content and exclusive offers.

Following a hook-up with American Idol last year, Shazam lined up a landmark deal with British broadcaster ITV, promising to let viewers snap up products they like during ad breaks, using nothing but their smartphone and Shazam’s mobile app. The first of these ads featured during the Britain’s Got Talent grand finale last May.

Indeed, Shazam has continued to iterate its product, eking out new ways to monetize through deals and partnerships. Earlier this month, it introduced its Rdio integration to all its active markets following its US launch last year, which works in addition to the Spotify integration.

“We have seen amazing growth and expansion in both the number of people who use Shazam on iPad as well as their level of engagement,” explains Rich Riley, Shazam CEO.  “With more than 300 million Shazamers globally who use the app more than ten million times each day, we have created an exciting and engaging new iPad experience for existing and new users.”

Riley adds that over the past year, they’ve seen “triple-digit growth” in terms of iPad app downloads. “[The] iPad offers an ideal way to experience more on the second screen as people watch television (the first screen), giving them more space to engage in additional content,” he says. “Our new app gives our fans the most efficient way to experience more of the media around them whether they are in their home or anywhere throughout the world.”

While these latest feature updates are iPad only for now, it’s safe to assume they’ll arrive on the iPhone/iPod touch incarnation, and its other mobile platforms including Android.