American Idol episodes are now Shazam-enabled, the music recognition startup announced today. The next time you watch the reality TV show, you will be able to use Shazam‘s app to find the song list in real-time.

Besides links to buy music from both the competition’s performers and the original artists, you will also get access to dedicated Twitter feeds and additional information about the hit Fox show, on time for its grand finale on May 22 and 23. 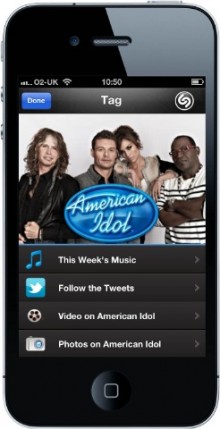 This announcement and the company’s recent focus on big live TV events confirms Shazam’s potential as a competitor to second-screen apps such as GetGlue and Miso.

As a matter of fact, it is interesting to note that the company doesn’t describe itself as a music recognition startup, using the much broader expression “media discovery company.” More generally, its ambition is to be “the best way for people to discover, explore, buy, and share, music, TV shows and branded content.”

While its social TV competitors are also based on media recognition, one of Shazam’s most interesting assets could be its user experience. A few days ago, it unveiled the 5.0 version of its iPhone app, which boasts faster results and a redesigned UI. As for its iPad app, its recent refresh includes Retina display support for the new iPad.