RunKeeper may have started life as a simple fitness-tracking app for runners, but it has evolved over time into something more far-reaching.

Indeed, RunKeeper has emerged as a platform, becoming only the second company to launch an app to integrate with the Pebble smartwatch (among many other hardware integrations), while reeling in health data from services such as MyFitnessPal.

And today, the company is announcing another significant step towards becoming ‘more than a tracking app’, as it rolls out a slew of new in-app fitness programs. In short, RunKeeper wants to be your very own personal, pocket trainer.

Though RunKeeper has previously offered training plans, today’s revamp sees a handful of paid options thrown into the mix from ‘expert’ trainers, and they are being made available directly in the mobile app too – they were only available via the Web previously.

Today also sees the expert advice move beyond running, and into stretching, hydration and other areas of wellbeing.

The initial roster of plans come courtesy of Greatist, Jeff Gaudette, Jeff Galloway, and RunCoach, though more will be added over time.

Depending on what you go for, the initial slate of paid-for plans will set you back between $20-30, and they can be purchased through the Web or RunKeeper iOS app. You will also be able to access your plans via the Android app, but you’ll have to make the purchase through the Web for now. 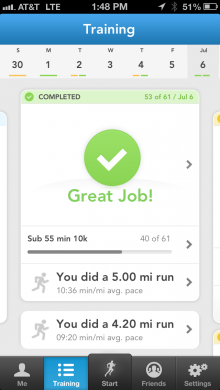 “The plans are designed to help users break down long-term goals into a set of manageable, day-by-day steps,” explains RunKeeper founder Jason Jabobs.

“These plans are reinforced by daily tips on topics like nutrition, stretching, and hydration, making the experience within the app a more complete view of how to lead an overall healthier lifestyle,” he continues. “A broader menu of goals help users choose a program that’s right for them – regardless of whether they’re beginners, advanced runners, or anywhere in between.”

Jabobs says that since the introduction of the initial set of training plans, users that followed them have worked out (on average) 50% more each week, compared to those who just track their runs, cycles and so on.

“Tracking your activities is a start, but guidance is key for many people who are trying to improve and may not know where to begin,” says Jabobs. “Over time, the goal is to evolve into a sort of personalized coach for our users — helping them make smarter decisions about their health and fitness.”

For launch, RunKeeper will offer 34 plans, 13 of which will be available for free. And we’re told more will be rolling out shortly.