Alienware dipped its little green toes into the wireless headset market for the first time this year with impressive results. The AW 988 is a premium device that delivers on its promises, but there’s some room for improvement.

The AW 988 leaps onto the scene with 7.1 surround sound, decent drivers, and enough clever design decisions to merit it a place towards the head of the pack. Before we get too far, however, let’s talk about this thing’s nuts and bolts.

I’m pretty ambiguous about the aesthetics of this headset. On the one hand I love the way it feels in my hands and on my head. The soft-touch material, premium foam padding and tight construction make it feel like something a fighter pilot would wear. But, on the other, it’s black and boring and takes almost no chances. 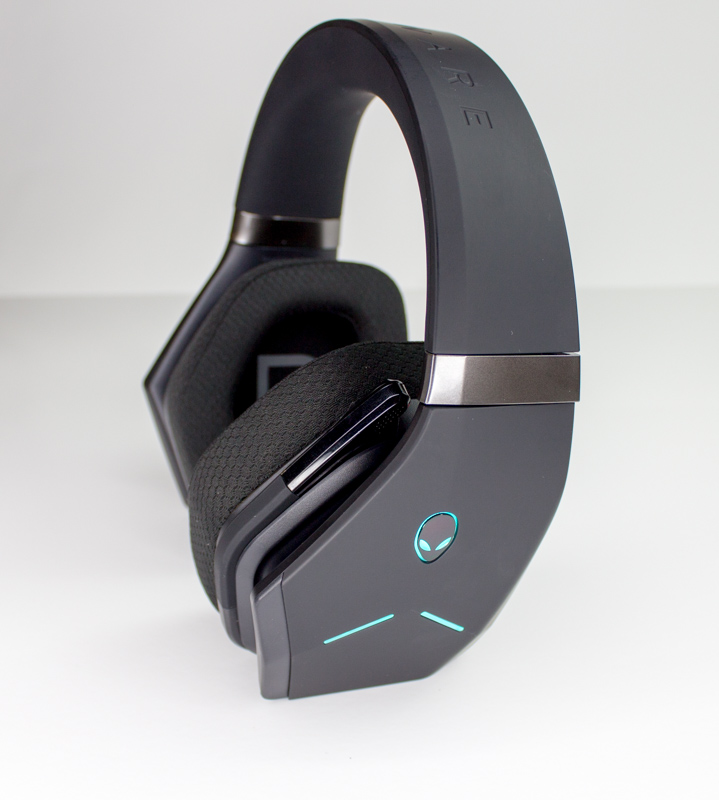 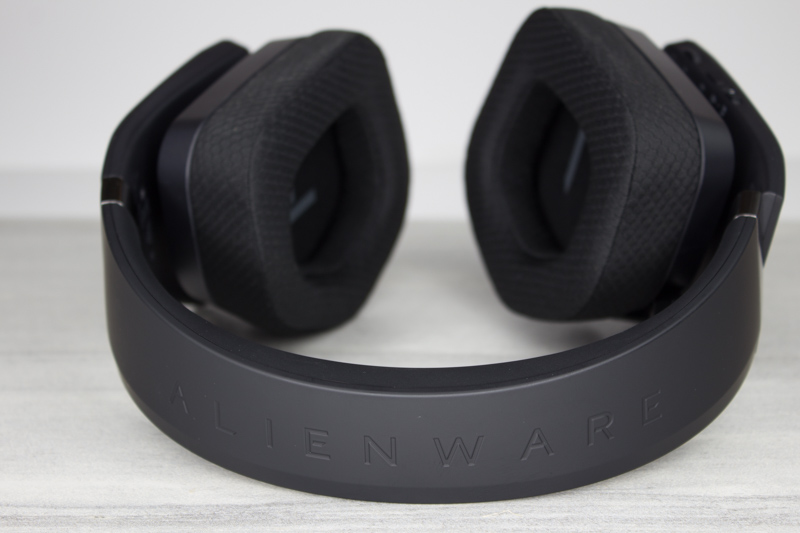 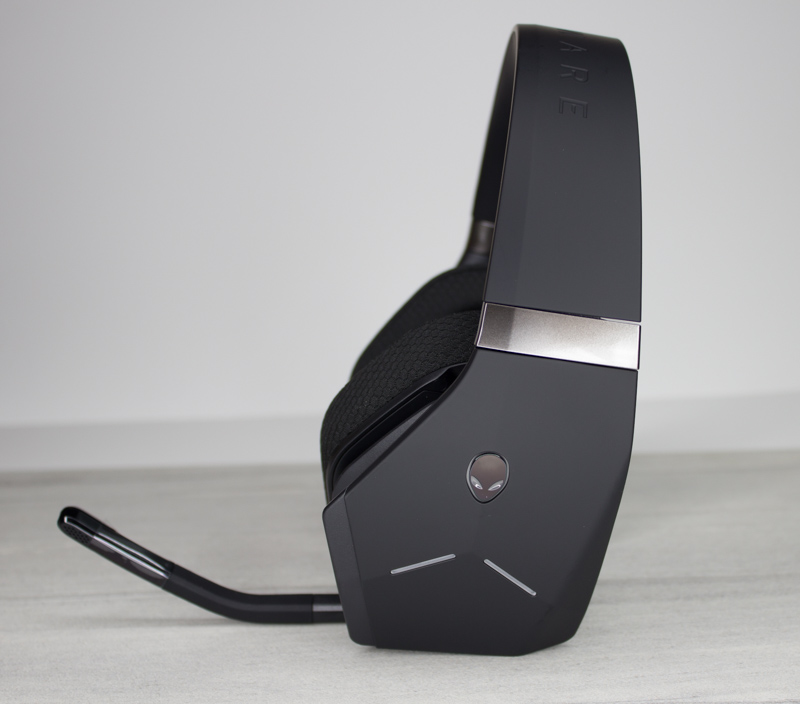 It’s incredibly well-constructed. The microphone tucks neatly away, out of sight and out of mind, when I’m feeling anti-social. I particularly liked that stowing it automatically muted it. The metal headband slides without friction and it never once snagged my hair — even when I tried to get it to.

The headband is wide and comfortable with a padded soft-touch covering. The ear cups rotate 90 degrees and fit over my ears – most over-the-ear cans bend the tops of my ears slightly, these didn’t. Aside from it being a tad heavy – 0.38kg (0.84 lb) – this headset feels as good as any I’ve used.

Other nifty design choices include a place to store the USB dongle inside the headset itself – a feature that gamers who travel a lot are sure to appreciate – and two-zone customizable LED lighting.

My only quibble with the design was the inclusion of tiny buttons and dials that are practically impossible to use without taking the headset off, at least until you’ve memorized their layout. It’s not a big deal once you get used to it, but it seems like Alienware could have at least made the buttons stick out or something. 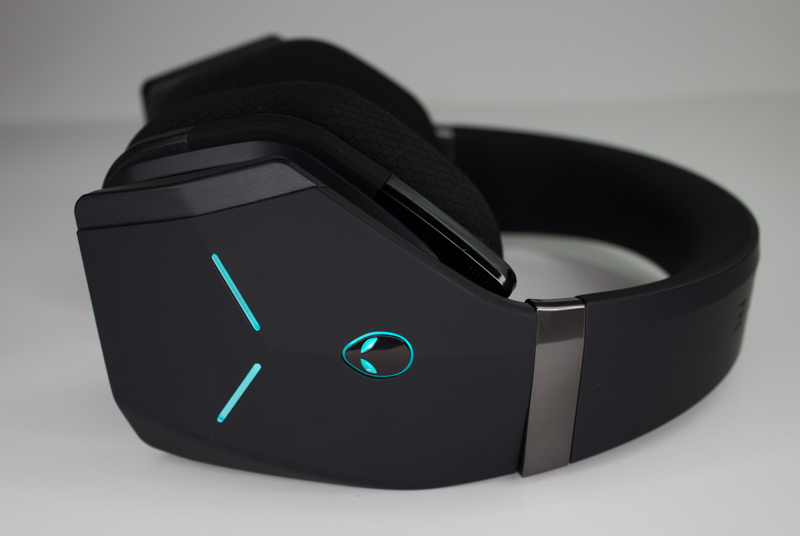 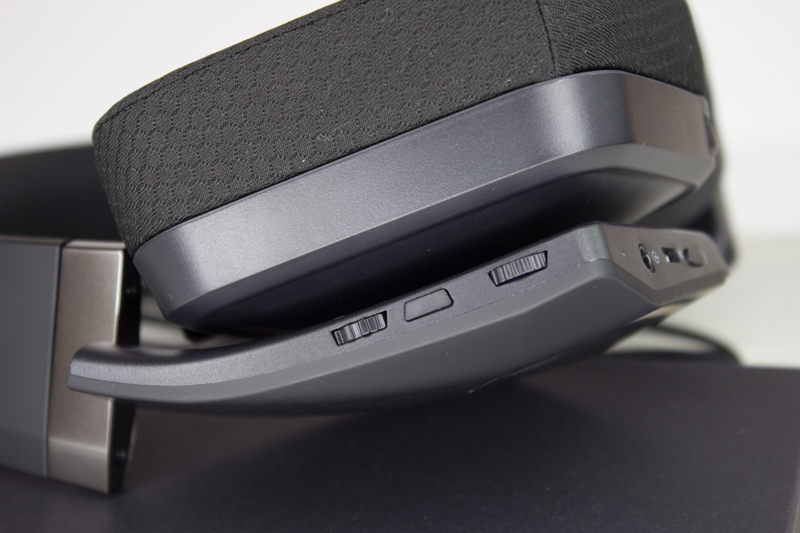 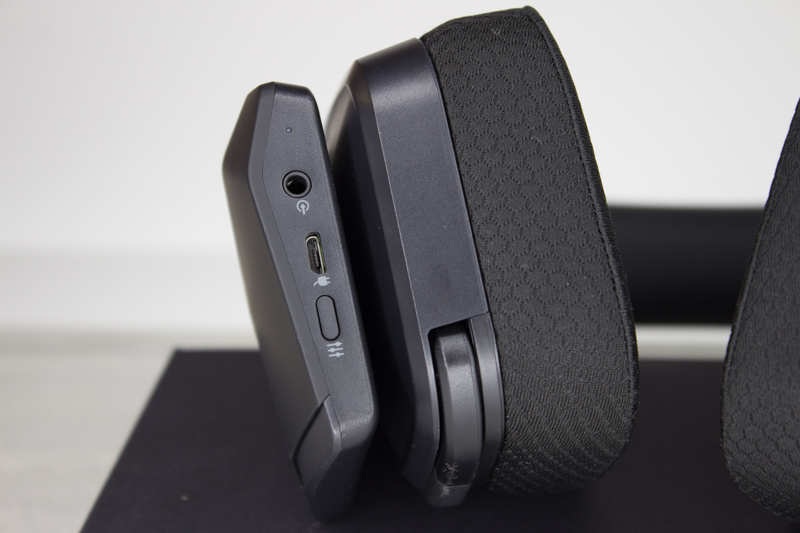 It’s a solid headset that feels like it can handle the dangerous life a professional gamer’s accessories have to endure. But looks aren’t the top consideration when it comes to audio gear.

This headset sounds amazing as long as you’re gaming. I tested it, on PC, on a variety of games including Resident Evil 7, Battletech, and Battlefront II. While playing the latter, a shooter, I was particularly impressed with the headset’s sound stage.

I could locate where lasers were coming from with my eyes closed, thanks to the high-fidelity nuances provided by the 7.1 surround sound experience. And the roar of a Tie-fighter or X-wing strafing overhead was jaw-dropping.

And the PC experience is made even better by the Alienware control software. I griped a bit about the company’s bloated Command software when I reviewed the Alienware Elite Gaming Mouse, but the headset has its own dedicated program. And it’s great.

You can change EQ settings between movies, music, and gaming – and the gaming settings break down to specific genres such as racing and shooter. Settings for lighting effects, noise-cancelling for the mic, and individual band EQ are also in the software. But my favorite feature was a cool tool called Audio Recon.

It basically gives you SONAR for FPS games by providing a visual indicator of the direction the strongest source of sound is coming from. After a few minutes I found myself glancing at it as just another part of my routine, and it actually seemed useful in Battlefront II. I didn’t get the chance to test with more frantic shooters during my review.

It’s clear Alienware put everything it had into crafting this headset with FPS gamers in mind. And I can honestly say my K/D ratio seemed a bit higher while wearing it, but take that with a grain of salt because my abysmal scores have nowhere to go but up anyway.

I also tested the headset on an Xbox One S with Dolby Atmos. And it sounded even better. I fired up Forza Horizon 4, NBA 2K19, Fortnite, and Overwatch – each one sounded amazing. Despite the fact the AW988 doesn’t have an external amp or huge internal drivers, it still manages to reproduce top-notch audio with surgical precision.

Alienware didn’t jam these things full of low-end to compensate for a lack of volume. And that means the sound fidelity isn’t propped up by reverb or bass-bleed. During gaming this is a revelation. For example, both individual voices and full crowds sound real — really real. With my soundbar, player interviews and crowd noise in NBA 2K19 sound as though they were previously recorded and are being played back on an iPhone speaker held up to a microphone. But wearing the AW988 is so immersive you can close your eyes and try to pick out an individual fan screaming from the top row.

Unfortunately, my love affair with the headset’s audio fidelity begins and ends with gaming. It’s not going to cut it as a music lover’s daily driver. The sound stage is too big for anything other than classical or electronica, and it’s too quiet.

It’ll get loud enough to give you ear-fatigue, don’t get me wrong, but if you’re trying to crank it to “11” you’ll have to be picky about the music you listen to. Songs with bass-heavy mixes, like Jidenna’s “Long Live The Chief” or Kids See Ghosts’ “Feel The Love” sound clean – if a bit too crisp. But older songs like Ray Charles’ “What’d I Say” and Creedence Clearwater Revival’s “Have You Ever Seen The Rain” sound tinny and a bit too far away. It feels like most music is swallowed up by the AW 988.

That being said, I don’t think you’re going to find a better sounding 7.1 wireless headset for gaming. It’s not just the sum of its parts that make the AW 988 a killer accessory – if you want to spend a bit more, you’ll get better options like dual batteries or higher volume – but the AW 988 is tuned incredibly well for gaming, I’ve never heard its equal.

At 200 bones (on sale, regular price is $229.99) the AW 988 is a bit pricey, but after spending a few weeks with it I’d recommend it over anything I’ve tried at the same price or lower. If you’re a serious gamer who doesn’t already have a favorite headset, I suggest giving this one a shot.