There’s been a lot of buzz the past few days about a service called Pair, which lets you interact with your significant other in an intimate way. Think of it as a “Facebook for lovers”, a “Path for couples”, or “Super-SMS”. In just its first few days, the app has seen over a million messages sent using the platform.

However, as it usually goes in technology, the first to execute on an idea isn’t the one that generates the most buzz or sees the most success. The rise of Pair is a perfect example of that, as we’ve seen quite a few apps that are “social network for couples”, but didn’t catch on like Pair has.

The idea of sharing things intimately with people, rather than with the whole world, has only just caught on, and Path’s latest success has a lot to do with it. Version 2 of the app was released at the end of last November and took a few months to gain traction. During that time, we heard about a few apps that wanted to focus on just you and that special someone. 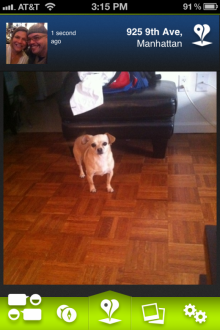 In early November last year, I wrote about an app called Cupple, which I said would be absolutely perfect for long distance relationships. At that time, its CEO Tim Allison told me this during our interview:

Cupple allows the two people in a relationship to have fun sharing photos and building a feed of memories and there is no concern over how that might be viewed by their wider social network. Email and SMS certainly have their place but they have become very functional and often just blur into the daily routine. Cupple is a richer, more connected sharing experience. And of course, completely mobile.

In December of last year, we wrote a post called “4 startups prove that technology can bring couples closer together“, which featured Kahnoodle, Duet, Tokii, and Between. Those apps all had similar features with the same premise; share things with only the person that you love.

None of these apps ever picked up much steam when it comes to getting mentioned in technology press. In addition, none of my non-geek friends used them either. When I mentioned Cupple to my fiancee, she said “why don’t we just use Facebook or texts?”.

When I told her about Pair yesterday when I came back from Y Combinator Demo Day, she said “Didn’t you already tell me about this app?”. So the idea isn’t new, the features have some differences, but perhaps Pair has the benefit of some “extras” that these companies didn’t have.

First and foremost, being a part of a program like Y Combinator definitely helps entrepreneurs get attention from technology press. Also, Pair was able to watch what others were doing and hone in on a few special features like “Thumbkiss” that would make it stand out. Pair has gotten so much interest that Path’s founder Dave Morin decided to invest.

All of this is a perfect storm that could make Pair stand out from the rest. For everyone else, instead of being frustrated that they didn’t get the same attention, they should be glad that there is now a “space” for their idea, which will allow them to innovate, execute, and perhaps get some funding of their own. Perhaps with all of this new found attention on “social networking for couples”, some of our non-geek friends will start trying some of these apps out for themselves and tell us which ones they like the best. Until then, Pair is the darling.