Current President of the United States of America, Barack Obama, is now on Tumblr. The official Tumblr for his 2012 reelection campaign sprung up just today, exposing it to the swarms of bloggers already active on the platform. According to the description on the site, the Tumblr blog will serve as the Obama 2012 campaign’s official home on the service.

At the time of this posting, the blog currently only hosts two different entries, the first being a note directly from administration of the blog, and another picturing a member of the campaign’s Field department. Clicking the photo provided actually links viewers directly to Obama’s official website where followers can volunteer to help with his campaign.

The official note from his campaign team reads:

It’s nice to meet you.

There are lots of reasons we’re excited to be launching the Obama 2012 campaign’s new Tumblr today. But mostly it’s because we’re looking at this as an opportunity to create something that’s not just ours, but yours, too.

We’d like this Tumblr to be a huge collaborative storytelling effort—a place for people across the country to share what’s going on in our respective corners of it and how we’re getting involved in this campaign to keep making it better.

You can send us a few paragraphs about how your latest phonebanking gig went or why you’re in for 2012. Share the latest chart you saw that made you go “woah.” Ask a question. Upload a photo of 2012 t-shirts or signs you see out in the wild. Pass along jokes, particularly if they’re funny. And if you’re among the Tumbl-inclined, send us posts you’ve published on your own Tumblr that we should look at re-blogging.

There will be trolls among you: this we know. We ask only that you remember that we’re people—fairly nice ones—and that your mother would want you to be polite.

Thanks, Tumblr. We’re looking forward to getting to know you.

The Tumblr also encourages followers of the blog to send in stories, photos and videos where the best of the best will be featured on the site. For this, the Tumblr points towards a submission link that should help get potential contributors started.

Through the blog, Obama supporters can also sign up for an email subscription to stay updated with the campaign, or donate to help its cause. Also included are links to Obama’s various social presences on Twitter, Facebook and YouTube, as well as the option to subscribe to his RSS feed.

How does it look?

Unsurprisingly, the layout of the official Obama Tumblr is incredibly clean. In fact, resizing the window’s width completely changes the user interface — both in ways that are easy to navigate. The theme of the Tumblr also seems to follow the same color scheme and general style of Obama’s official website, maintaining the look and feel that supporters and regular visitors are familiar with. Naturally, this is important when it comes to the branding and imagery that typical viewers associate with Obama.

See below for two different width resizes of Obama’s official Tumblr blog, and how changing this affects the way it looks.

Obama’s official website also had more to share on the official Tumblr blog launch. An update to the website includes a description of what Tumblr actually is for campaign followers who may not be familiar with the service, as well as a quick call to action.

If you’re not familiar with Tumblr, it’s a cross between a blogging platform and a social network. Its submission feature also makes it really easy for anyone to submit something for publication on a blog, which may be the biggest reason we’re excited to get this going.

You can submit text, a photo, a video, or a link—and become a part of a collaborative effort to tell the story of how people across the country are helping to build this campaign.

Today, with Republicans in Congress continuing to block any measures to support jobs, share why you can’t wait for action.

We’ll look forward to checking out your submissions. 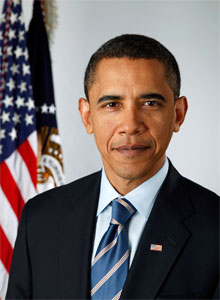 Obama certainly seems clued up on social media, doesn’t he? Or at least, his aides do, assuming they are the ones in charge of his campaign. His various presences online all seem to take advantage of every angle one could possibly take towards personal branding when it comes to both social platforms and tools. His campaigners also seem to be fairly savvy with search engine optimization tactics.

Not only is Obama on Tumblr, for example, but as I mentioned above, he also has a Twitter presence, an official website, a YouTube channel, Facebook Fan Page and multiple RSS Feeds. Then there’s the fact that he actively promotes his online presences through these various social channels, making it incredibly easy to essentially “stalk” him online. His social presence provides the opportunity for those familiar with him to actively speak out and feel as if their voice is being heard, thus encouraging the eventual long-term loyalty of his voters while developing a positive brand reputation.

A big part of Obama’s original “rise to the throne”, so-to-speak, was his effective campaigning and ability to reach out to younger audiences who may not have previously been interested in politics or voting to begin with. Now with his established social presences, potential and previous voters can remain almost intimately familiar with the ins and outs of his ongoing campaign for reelection.

All he needs now is a Google+ account. I’m definitely down to “Hangout” with the President of the United States of America.

You tell me. How do you think Obama’s very active presence in the social world will affect the outcome of the presidential elections in 2012? Weigh in below.