From the moment I flicked on the power switch of a friend’s Super Nintendo console to play Super Mario World, I’ve loved Nintendo. Sure, I’d tried other hardware before it, but once I’d tried Nintendo’s brilliantly designed offerings, I was smitten for life. That’s why it’s sad to see the company with its fingers in its ears, shouting “I can’t hear you!” and ignoring a very real threat.

I never play with my Nintendo DS any more. I have a bunch of games that I’m sure are great and that I really should play, but as anyone with their eye on tech trends over the past few years will know, Apple’s iOS is a much more exciting, flexible platform. Its games are more easily accessible, too. You can discover a game, pay for it, download it and start playing it in the space of a minute, as opposed to visiting a shop or waiting for overnight delivery of a DS game.

Oh and occasionally when a game is available on both platforms, you could end up paying around ten times more for the DS version. In the UK, Plants vs Zombies for DS costs £18.99 compared to its iOS version at just £1.99. The price difference is maddening when the gaming experience is so similar, and perhaps arguably more enjoyable on iOS.

Nintendo’s new 3DS handheld got off to a slow start and its stock price has slumped this year, leading investors in the company to call for it to adopt iOS. The company’s president responded by saying that such a move was “Absolutely not under consideration.”

While sales of the 3DS appear to have started to pick up, thanks in part no doubt to the arrival of a game featuring Nintendo’s golden goose, Mario, it hasn’t shattered the reality that gaming is just a lot more convenient on a mobile phone than it is on a comparatively large, flip-top device that means you have to carry one more thing around with you. And when real innovation is happening in gaming on iOS (see RjDj’s excellent Dimensions, for example), the logic of owning a dedicated handheld gaming device diminishes even further.

It struck me as I traveled by train around Nintendo’s homeland of Japan earlier this year that the number of people playing games on iOS devices far outweighed those using a Nintendo handheld. Just one year before, when I made similar journeys around the country, the DS was a firm fixture on just about every commuter train and Tokyo Metro carriage. Sure, that’s hardly a scientific survey, but it’s the same evidence Nintendo staff, executives and investors will be likely to see as they travel there.

Pride before a fall? 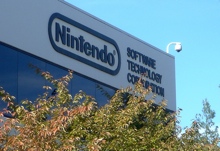 Nintendo’s proclamation that it won’t be bringing its titles to iOS smacks of blind corporate pride – a company with decades of success behind it that doesn’t want to change. There is some logic there, of course – why drop your own proprietary, locked-in ecosystem, and all the benefits that has, in favour of being a mere node in Apple’s?

Yet the harsh reality is that in a world where phones are also excellent gaming devices, most people won’t want to carry around two handhelds. However, what Nintendo has in its favour is that its games tend to be great. It may be a little over-reliant on the same few franchises (Mario, Zelda, Metroid, Brain Training etc), but there’s little doubt that bringing that same quality and attention to detail to iOS would make its games sure-fire hits on the App Store.

You may have noticed at this point that I haven’t suggested Nintendo makes games for Android or any other mobile platform. While that may make sense for the future, the fact is iOS is currently the strongest performer for gaming, and a logical place for Nintendo to start.

With the five year-old Wii still performing pretty well, Nintendo hardware may still have a place under our TVs – but in our pockets? It’s time to let go, Nintendo.