Mobile now accounts for 10 percent of all Internet usage worldwide, after the rise in demand and ownership of smartphones and tablets saw the proportional use of the mobile Web more than double over the last 18 months.

Asia is the region where mobile is most active, accounting for almost 18 percent of total net usage, but a sizeable increase in mobile-based surfing is also visible in Europe and Africa, among other regions.

Last week, we reported that traffic from the mobile Web will overtake fixed-line Internet usage in India by the end of the year, and that inspired Pingdom to update its stats on global mobile Web usage with some interesting findings.

Worldwide, mobile Internet now accounts for 10.01 percent of total Internet usage, having increased from just 3.81 percent in 2010, which is testament to the growing adoption of smartphones and tablet devices.

To give some context of that market, Apple alone sold 32 million iPhones and nearly 12 iPads in the last quarter alone. Industry-wide smartphone shipments rose 40 percent year-on-year to reach 144.9 million units during the three month period, according to IDC.

Breaking the data down regionally, Pingdom found that Zimbabwe (58.06 percent) and Nigeria (57.89 percent) top the pack, with India in third with 48.87 percent of its Internet usage coming from mobile devices.

The rest of the countries that rely heaviest on mobile are predominantly in Africa and, when casting an eye over the data worldwide, the continent is just behind Asia as the second biggest use of mobile Internet.

Looking at the difference over the 18 months since Pingdom’s last measurement of mobile vs fixed-line net access shows that Asia’s dependency on mobile has grown the most — up to 17.84 percent from 6.1 percent. Strong gains have also been posted in Africa, Europe and Oceania too.

While in Europe, smartphones and tablets are a more convenient way of getting online for many, the factors behind mobile Internet growth in the developing world are different.

For many in countries like India, access to PCs is limited as they are often too expensive or the infrastructure necessary to deliver affordable and reliable Internet services is also expensive or unavailable. In these cases, mobile is a more accessible and affordable option.

The data doesn’t break down mobile access by device type but, if it did, we’d likely see that Web-enabled feature phones are more significant in regions like Africa and Asia, where smartphones are still financially out of reach for many.

The significance of mobile is shown by companies like Twitter’s continued focus on mobile Web offerings, while devices like RIM’s $215 BlackBerry Curve 9220 and Xiaomi’s $320 smartphone in China are helping make sophisticated phones more affordable. 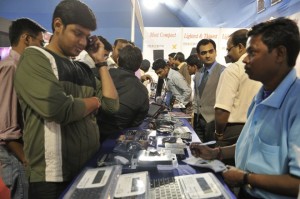 That, in turn, is help get devices in the hands of more people in emerging markets, helping to provide the benefits of the Internet to those that do not enjoy the PC-based Internet experience.

Already industries like farming have been boosted by mobile phones and the mobile Internet which, as the BBC reports, enables rural farmers in India connect with urban based buyers and develop their business.