As Samsung gears up for the imminent launch of its latest flagship smartphone, the Korean electronics giant has announced a partnership with music-streaming service Deezer.

Those who buy the new Samsung Galaxy S5 will be given six months worth of Deezer’s Premium+ service for free, equating roughly to €60 over the period. The partnership applies to European countries only (not including Deezer’s home turf in France, unfortunately), and will be extended to include other Samsung smartphones and tablets in the future.

This isn’t the first time Deezer has teamed up with Samsung however – the two companies collaborated to enable Deezer streaming through smart TVs last year. 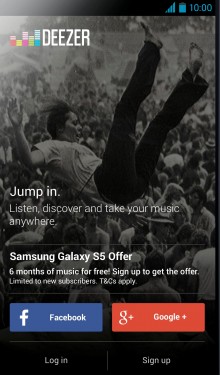 Deezer claims five million paying subscribers out of 16 million monthly active users, and partnerships such as this are key to it encouraging more people to pay for a subscription, rather than relying on advertising revenue. Bundling techniques in particular have become an increasingly popular means of combating subscription fatigue, with phone bills, cable bills, home phone bills and all the rest leading us to saturation point in terms of the number of individual expenses that are debited from our bank accounts each month.

Indeed, in November last year, Deezer started using Boku’s payment platform so users could elect to pay for their music directly through their mobile phone bills, and it has previously hooked up with mobile networks such as EE in the UK too. Spotify has previously announced a slew of partnerships with mobile networks and broadband providers, not only to help spread the good word via marketing, but also to ease the pain of yet another subscription.

With this Samsung tie-up, it’s more about Deezer getting consumers to understand the benefits of a premium subscription, which is a whole lot easier if they’re active users accustomed to uninterrupted ad-free music. And for Samsung, of course, it’s one more carrot to dangle in front of its own prospective customers.