Bizcamp Tel Aviv is not far off now with a competition already running to bring a startup from the UK to the event and a schedule coming together that will encompass meetings and workshops with new companies, entrepreneurs and investors in Israel.

The event is organised by the city of Tel Aviv, Israel’s Ministry of Foreign Affairs and The Next Web and will run from October 14-24. As the deadline for the competition draws near, we’re taking a closer look at startup life in Israel through the eyes of an entrepreneur.

Raphael Ouzan is the founder and CTO of BillGuard, a startup that is building ‘antivirus for bills’. The product basically runs registered credit and debit cards through automated checks to look out for strange patterns or problems that might be a sign of billing errors or other issues. These issues are then compared with others flagged up by BillGuard users to spot problems on a wider scale.

Ouzan also founded the non-profit Mission Intelligence, a training program focusing on software development, entrepreneurship and innovation, working with top graduates from around the world who are looking for internships and opportunities with leading tech firms in Israel.

Currently Ouzan is also working with Bizcamp Tel Aviv to make sure that the content for the program is unique and has practical value to the attendees. He says that people who go to the event can expect, “Real, practical insights from people who have done it and a lot of perspective from other people who are struggling with the same incredibly tough challenges of bringing innovative products to the world.”

Interestingly Ouzan’s start in technology was stymied by limited access to tech tools that would ignite his passion for computing. Growing up in France, his experience with computers in education will be familiar to many of us, “The technology classes at school didn’t go much further than teaching how to use Microsoft Office!” he comments.

This didn’t stop an inquiring mind though, as Ouzan explains, “As a kid, I was drawing designs of machines to send to space. For my 10th birthday, I asked my grandmother to subscribe me to a monthly gaming magazine and that’s how it all started. The last section of the magazine was dealing with hardware and computer science and that’s how I became aware that learning programming was much more practical than sending toys in orbit!

“After going through programming lessons from the slow dialup Internet connection my parents installed, I thought I could build anything. At the time, small businesses were just starting to discover the potential of the Internet so it wasn’t long before I was building websites for all the businesses in town!”

As with most Israeli men, Ouzan enlisted in the army as an 18-year-old. An experience he says helped to form his work ethic. “To me, not long ago a foreigner, it sounded unreal to provide such demanding and sensitive responsibilities to such young people. But in some advanced units, the impossible is the day-to-day of many soldiers.

“Unbelievably smart young people getting together to apply audacious and creative ideas to sensitive and sometimes life-critical problems. I had the opportunity to take part in cutting-edge research and development. Outnumbered by most armies, technology is the IDF’s main if not only relative advantage. 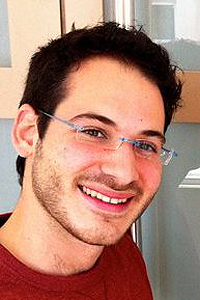 As well as the work with technology, the military lifestyle led to a mind-set that is useful for startups anywhere, “Besides, the professional learning, the military unveils in many people what I believe to be the key skill of entrepreneurs – the “I can do it” mentality,” explains Ouzan. “At the age of 20, after the officer training program, I was put in charge of 10 soldiers on mission-critical operations. This certainly builds a character. I was trained to manage high-risk and high-uncertainty situations and stay on top of things no matter what. You realize quickly that the best ideas, when executed well, can change the course of things.”

The attitude that anything is possible is something that Ouzan put to work immediately upon leaving military service. “The make or break of any startup is mainly dependent on this skill. Beyond the initial vision, startups live or die on the ability to execute in such difficult situations. The vision is often strong but the path to the solution is uncertain. Whether it is disrupting an industry or changing a few minutes a day of people’s lives, it’s a long course of managing the “emotional roller-coaster” of the day-to-day unknown, learning and iterating as fast as possible. As soon as you finish the army, you feel like you can do anything and like many, that’s what I did; I founded BillGuard with my co-founder Yaron Samid at the age of 23, the day of my release.”

A company like BillGuard could be based anywhere in the world. It is easy for tech entrepreneurs to consider moves to the West Coast of America or Germany’s tech hub in Berlin, but Ouzan feels that Israel offers some unique opportunities not found in other parts of the world.

“We asked ourselves the question of where to be located many times throughout the first stages of the company. We decided to open a front office running mainly business development and marketing out of New York, but the entire product development and operations is run in Israel.

“In Israel, you have access to an assembly line of outstanding tech talents with the ‘I can do it’ mentality, perfect to build the dream teams necessary to tackle the wildest technologies and product visions. The approach to hiring is very different from most places. It’s not about your age or your degrees. It’s about what you’ve done and there’s always a friend you can call to vouch for it, even when you just got out of the army.”

Though there are differences, Ouzan says that the community in Israel is what makes it similar in some ways to other tech hubs, “The country is so small, and the startups geographically all conglomerate next to each other, creating a tight network always available for advice, feedback and mutual business. Every night, there’s an event for entrepreneurs to connect, present case study, answer questions and make introductions to investors.

“I’d say that the culture is much more appreciative of all kind of entrepreneurs that the other countries I have visited. In Israel, working at a startup represents the highest stature and inspire respect and admiration, somehow much more than a degree at the best schools of the country.”

Tel Aviv is now well established as one of the top startup cities in the world. Ouzan has noted a few changes since he moved there and most of it is good.

“We’re proud of the recent acquisitions from tech giants such as Apple and Facebook in the past years, but we’re up against our most important challenges yet – successfully run major consumer products. We have recently worked hard to create the skills and the mindset to add to the hard-core ground-breaking technology the ability to succeed in the consumer web space,” he says.

“As a maturing tech community, more and more entrepreneurs today are looking to put aside the merger and acquisition offers and focus on long-term to attempt to create the major IPO businesses Israel is lacking.”

As the Bizcamp Tel Aviv competition is offering a UK startup the chance to explore the tech territory in Israel, Ouzan is naturally keen to explain where is best to visit and why. “I’d recommend any foreign startup visiting Israel to at least stay one day and one night in Tel Aviv, both in the same street, the Rothschild Boulevard.

“The day is for visiting as many startups as you can. Many of them are within walking distance (check out mappedinisrael.com to plan your steps). The night is to go from the offices to the places where we get our inspiration – going out to eat, drink, dance and party in the most symbiotic ‘work hard, play hard’ city.”

If you want to enter the competition, get your skates on as the application process closes on August 22. A panel of entrepreneurs, investors, journalists and statesmen will select five UK finalists to take part in a live Grand Final event on September 3.