When Microsoft purchased the Perceptive Pixel company, maker of 55 and 82 inch touchscreen displays that go by the eponymous acronym PPI, what it intended to do with the firm wasn’t completely clear. At the time, Microsoft stated the following:

The acquisition of PPI allows us to draw on our complementary strengths, and we’re excited to accelerate this market evolution […] PPI’s large touch displays, when combined with hardware from our OEMs, will become powerful Windows 8-based PCs and open new possibilities for productivity and collaboration.

According to Ballmer, Microsoft will [utilize] its research, development and production of multi-touch technologies to further upcoming software and hardware, with the company showing off its huge 82-inch touch-enabled screen at the WPC event.

The purchase of Perceptive Pixel provided Microsoft with both intellectual property that could be exceptionally valuable in the coming decade, and ownership of what I would call the preeminent maker of large touchscreens.

And the prices are coming down. The 55 inch PPI display, according to Microsoft’s Eric Rudder, the Chief Technical Strategy Officer at the firm, will run you around $7,000 at present. In conversation on Microsoft’s Redmond campus, Eric indicated that he was working to quickly lower the price of the displays.

They will ride the lessening cost curve of the television set world, it would seem. This puts the 55 inch PPI but a few generations from being affordable enough for the average enthusiast. The 82 inch behemoth will likely take longer, but the question of its affordability is a when, not if question.

Here’s one in action with someone that you are familiar with:

If you walk Microsoft’s Executive Briefing Center, you will see PPI displays strapped to the walls, free for anyone to use. If you walk through the latest rendition of Microsoft’s Home of the Future, you can’t miss them studded into walls.

Office team demonstration? Let’s use a PPI. Latest gadget that is a must have in an executive office in Redmond? A PPI display. And not only the most senior staff will have access to the hardware; this is Microsoft’s own technology, and the company is rallying behind it.

Rallying is the wrong word, given that it almost intimates forced enthusiasm, which isn’t the case here; everyone wants a PPI because they represent a new hardware category that has the potential to disrupt current computing trends and transform how we interact with digital information.

We’ll get to why in a moment, but let’s rewind.

The first large touchscreens that Microsoft sold were the Surface 1 and Surface 2 – note: very different than the Surface RT and Surface Pro tablets. They were jokingly named the Big Ass Tables. Engadget coined the name so far as we can tell, with the excellent headline “Microsoft Surface: one day your computer will be a big-ass table.”

Prescient, if by accident. The second Surface device managed to become a Big Ass Coffee Table, which TNW noted could be mounted to a wall, creating a much more compelling experience. However, it was more prelude than product: 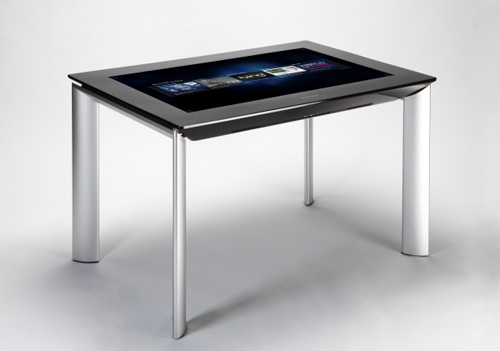 You can still find Surface 2s on Microsoft’s campus, and if I recall, Surface 1s in some Microsoft stores. They are now anachronisms. PPI displays will replace them as both thinner, more responsive, and easier to mount displays that provide a superior computing experience.

For comparison, here is a PPI at work:

However, Microsoft is a device and service company, not simply an OEM – I kid – so how does software fit into the PPI gambit? Let’s answer that.

In its review of the Surface Pro tablet hybrid, TNW dichotomized applications into two categories: Windows 8 apps, and Windows 7 apps. Windows 8 apps are found in the Windows Store. Windows 7 apps run on the desktop, and are what you are familiar with if you aren’t running the latest Windows build.

However, on the Surface Pro, we found their use frustrating:

Windows 7 apps, as defined above, are often a poor experience on the Surface Pro, as the screen is quite small; Windows 7 apps feel designed for more total screen space. Thus, you find yourself holding the tablet closer to your face than you otherwise might like. This isn’t comfortable. And in desktop mode, when the Surface is docked to its keyboard and kicked on its stand, you find yourself leaning in to make out just what is going on. Again, this isn’t comfortable.

Toss those applications onto a 55 or 82 inch display, and they in fact run perfectly.

That, however, is only a sliver of the experience. Windows 8 on a large touchscreen is simply a different operating system. The methods by which you interact with Windows 8 – swiping, sliding, and the like – are far more natural and fluid when you use your entire arm and hand, rather than a single finger.

A short note here, before we get into how Microsoft will use PPI displays to change computing in its favor: Appex. Appex is an application team under the Bing aegis that takes data from the search product, and translates it into application format.

If you have used the native finance application in Windows 8, for example, you have used Appex code. The team created several applications for Windows 8 that answered a number high-use search queries with dedicated applications. The team thinks of itself as a “North Star” for developers, according to the team’s Mira Lane.

I bring this up to make a point: the guiding lights of Microsoft’s app design crews are building applications that only look better the larger the display that they are splayed across. Fire up the Windows 8 weather app, and then imagine it filling an 82 inch wall display.

Windows 8 is designed for touch input. Microsoft will hem and haw about how great it is with standard mouse and board input, but they are either deluding themselves, or putting a brave face on it. Windows 8 is not itself in a non-touch environment, period.

As noted above, it becomes all the better on a larger display. [I could talk here about how well Kinect fits into this argument, but that is a post for another day.] However, you have to ask yourself who else is working on something like PPI displays.

Apple is a leader in touch, but its focus is on mobile devices; certainly iOS devices are stellar, but they are a focus on small displays, and content consumption. It’s a different space. Windows OEMs are building 24 inch and slightly larger all-in-ones, but they haven’t grown in size for years.

No one but Microsoft is working on 50 inch and larger displays, the software to take advantage of them, and peripherals – Kinect etc – to further extend them. Frankly, it’s a fresh form of computing unlike anything that you have used before. And, it is commercially available; Microsoft is currently “seeding” the displays to corporations, according to the company.

Currently the hottest companies are focusing on the smallest displays; Facebook’s work to bring its Web interface in line with its mobile applications is an example of this. In Redmond, however, Microsoft is making the opposite bet: that the bigger the screen the better.

If the company can get the price down on the PPI units, they will be coming to a wall near you.