Massive Health, a start-up with huge ambitions to revolutionize health care, has made some significant internal changes.

The company’s co-founder and CEO, Sutha Kamal, has left the company and will be succeeded by co-founder, and user interface expert, Aza Raskin. Raskin’s official job title will be Chief Vision Officer.

Raskin and Kamal say the departure is primarily a result of different and conflicting visions for the company. Raskin, known for his infatuation for ‘design as a feature’, will make this the primary focus for the company’s health focused products going forward. 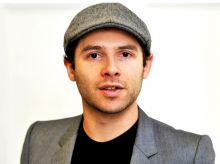 “We think it’s critically important to have somebody whose core is design leading the company” says Raskin. And with his pedigree (his father was interface expert and Apple Macintosh designer Jef Raskin), Raskin’s previous experience as head of user experience at Mozilla Labs (amongst other founder and design roles), and the fact that Raskin was giving talks on User Experience at age 10(!) –  he’s undeniably qualified.

On a personal note, Raskin is currently the only reason I’m still using Firefox. He led the development of a feature called Tab Candy (now tab groups), surprisingly yet to be ‘stolen’ by competing browsers, although I wish they would.

As for Kamal, in an email he emphasises that he will continue to be an ardent supporter of Massive Health and its team. He refrains from giving away too much about what his next role might be but says “my vision for what’s next in healthcare – and the value of design – hasn’t changed, and I’m intensely excited about what I’m working on next. ;)”

Design as a Feature

Massive Health aims to help solve health care through data analysis, and the importance of design in doing so is not to be sniffed at. Raskin elaborates:

“There’s this wonderful paper called The Unreasonable Effectiveness of Data (PDF) and it shows that for every increase in order of magnitude of data you have, it beats all improvements in algorithms. For me this means to get data, you have to get people to use you…so design is the necessary prerequisite to the data that you want.”

And with the success of its first mobile app, The Eatery (App Store URL), which is a smart and simple way of keeping track of your daily eating habits, the findings and conclusions to help benefit the world’s health are already being presented.

Kamal’s departure isn’t the only significant change the in the company. Massive Health also welcomes on board Michael Margolis, previously at Apple working on the user interface of AppleTV, to focus on development of the company’s iOS apps.

Seed funded to the tune of $2.25 million by some of technology’s most prestigious investors (Greylock, Andreesen Horowitz, Charles River Ventures & MDV) the expectations for Massive Health are huge.

With funding in place, Raskin and his team have time to make big things happen. Massive Health’s plan is to launch a number of products and experiments for the consumer over the next year or so, but it maintains a firm long term goal of eventually using the data collected to help hospitals and clinics fix the notoriously messy American healthcare system. The method is similar to how Dropbox has managed to infiltrate the enterprise by making it a priceless tool for the customer first, eventually forcing businesses to buckle and use it because of its sheer popularity among staff.

With its management in place, Massive Health is focusing on building design-led products – specifically mobile apps – to transform health. Raskin is keeping schtum on what the follow up to its first app The Eatery will be but helping in the areas of sleep, exercise and stress are to be expected. In the mean time, developers interested in joining its revolution should consider taking a peek at its jobs page for opportunities; and if you haven’t downloaded The Eatery (our review) yet, do so, it might just change your life.