Despite what appears to be evidence to the contrary, many social networkers — especially those with a photo focus — are deeply concerned about privacy. That’s why so many imaging apps now emphasize selective sharing options as an alternative to splashing your enviable personal life all over Facebook. 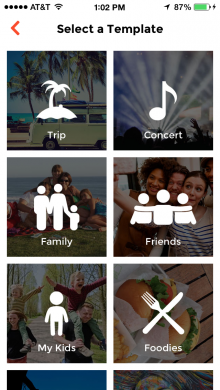 These ingredients, by themselves, are not new. 23Snaps, for example, has long touted its privacy features. EyeFi Mobi‘s new private cloud sharing service also emphasizes selective sharing with granular privacy controls for friends and family. A host of apps are working the multimedia angle to boost audio integration.

Lenshare mixes and stirs these elements together into “moments” that let you relive your experience. Moments are private by default, but you can share them with anyone you choose.

When you share a moment from the app, it creates a “Phideo” object, which captures pictures and sounds and gathers them into a single storytelling layout. You select the photos you want to use and then choose from eight built-in templates such as Family, Foodies, Trip and more. 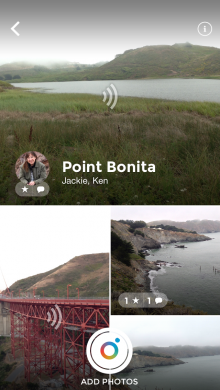 You can shoot and record ambient sound or narrative on the fly or load images from your camera roll into the template to create the moment.

To share it, add people from your address book. Notably, the app is based not on email addresses but on phone numbers — similar to messaging apps such as WhatsApp, Telegram and Messenger.

When you’ve chosen the people you want to share with, the app sends a text message with a code that invites them to download the app to view the moment. 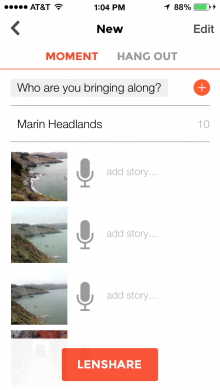 When you share a moment, it’s automatically saved privately, in print quality in the cloud, where you can retrieve it at any time. Audio clips can be as long as 12 seconds.

Users will see two variations on the theme: Moments and Hangouts.

A Moment is a way to bring along the people you care about to an event, such as a holiday or birthday. Moments are sorted according to the time in which the photo, sound and story is captured. A Hangout is a place to share all moments with a group. For example, a Foodies Hangout would be where you share foodie moments with interested companions. Version 2.0.1, expected to launch next week, will also include a smart sorting feature for moments. 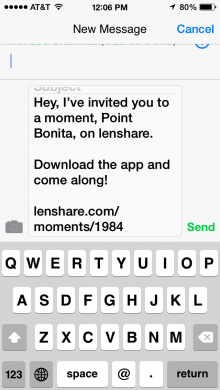 I found Lenshare generally easy to use, and while I am more email than phone oriented, the logic behind using phone numbers makes sense. After all, people generally have only one mobile phone number, while they may have many email addresses.

The moments were flexible, letting you swap images in and out, record segments after shooting, and edit the presentation to your liking.

You or your viewers can favorite and comment on individual images within a moment, as well. And of course, adding audio into the mix gives the whole presentation that extra punch.