Years before the notion of Web 2.0, dialup and AOL ruled the nation and the web existed in its 1.0 infancy. After the benefits of logging online were experienced by the masses, the web began growing blindingly fast. The web continues to move so quickly that, in a extremely short period of time, what was once considered a modern design quickly becomes a vintage artifact of the past.

I’ve written about the dot-com bubble before, and continue spending hours digging for more insight on the events that took place. The excitement and recklessness that surrounded a brand-new, bustling online industry cannot be explained through the likes of Wikipedia.

There are tons of books, commentaries and documentaries on the subject that I recommend (especially for new entrepreneurs), but I believe a first-hand experience of the Internet’s infancy has been preserved far better than you might expect. You just have to know where to look.

The Wayback Machine is an old favorite of mine and many of our readers should already be familiar with it. The Internet Archive started downloading popular websites periodically in 1996, and continues to preserve the web’s history to this day. As of 2009, the Wayback Machine contained approximately three petabytes of data and was growing at a rate of 100 terabytes each month. And while the site feels a bit slow and buggy at times, it is still the absolute best resource for revealing the ghosts of the Internet’s past.

Spend some time searching and you’ll find many lost and defunct websites that heavily influenced the modern web. A 1997 snapshot of Apple.com feels like a scamming knock-off , while Amazon’s earliest iterations aren’t much different from its latest design. Google.com’s first iterations aren’t pretty either, especially the horrific 3D logo from 1998, while Google was still hosted on Stanford’s servers. 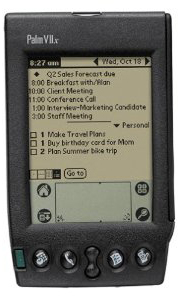 Amazon’s product database has been growing since 1996. Most importantly, Amazon never seems to delete a product after it’s been added to the database, even if it’s been discontinued. Dated products from the past decade include the PalmOne VIIx Wireless Handheld (with reviews dating back to 2000) and Microsoft Windows Me.

Although the images, specs and product descriptions are informative, the most valuable aspect of the database lies in the user reviews, which feel incredibly dated, yet remarkably relevant. The reviews showcase exactly what consumers thought of emerging technology; the kind of details that we’ll never have access to for past technologies like the first TVs or telephones.

Sites like ZDNet, Wired, CNET and Slashdot have been reporting on the ups and downs of the web industry from the beginning. Most impressively, many of these news sources continue preserving their past articles, redesign after redesign. Searching with Google News, start by setting the publishing dates and try filtering by publisher.

Here’s an article dating back to October 1996, explaining Microsoft’s foray into the world of e-commerce. Another article on CNET covers the demise of Flooz. More gems include the decline of Napster, and the AOL/Time Warner merger.

Although YouTube launched in 2005, thousands of nostalgic home videos, vintage ads and hardware tests are readily available for the historically-inclined. Archives include Webvan’s “Manifesto” from 1999, commercials for a blazingly fast 56K modem, Pets.com, Lycos, Hotmail and eToys.

Check out these two videos for more historically epic action:

There are tons of other collections that have stood the test of time. NetHistory, Hobbes’ Internet Timeline, ComputerHistory.org, Netvalley and Living Internet are some of the best remaining, retro resources available. Other accounts, like editorial flashbacks offer continued insight into how the industry began.

No matter if you’re a designer, developer or an entrepreneur, those who cannot remember the past are condemned to repeat it. Unless you experienced the early boom of Internet startups, it’s important to go back and do your homework. Ideas, good and bad, tend to repeat themselves.

Thanks to the effort of web historians, many artifacts from the last two decades have been saved. Preserving our past as we continue to race forward is an important and difficult task, and it has even been the subject of recent exhibitions like Digital Archaeology. Unfortunately, many groundbreaking sites have been erased from history without thought. This issue continues to grow as we embed social networking into our daily lives. More concerns, including privacy and the choice to not be archived, are also valid.

As time goes on, we can only hope that some sort of history remains available for newcomers to look back on. Keep in mind that the current incarnations of Apple.com, Microsoft.com and Google.com will likely feel just as lame in ten years as their 2001 counterparts look today.

Have you taken any steps to preserve your digital history? What would you do if Facebook, Google or Yahoo closed shop and lost your data?