It’s hard to know which Kickstarter campaigns are really legitimate sometimes, which is why when you saw ‘staff picks’ branding on the site, you probably thought what you were backing was legit.

Staff picks was a feature that highlighted promising projects on the site to give them a boost by helping them get exposure through the email newsletter and highlighted spots around the site.

The reality is that campaigns often used a self-created ‘Kickstarter staff pick’ logo and added it to their own campaign, despite many of them appearing to have never been ‘picked’ at all — instead using the unofficial logo to make themselves look more legitimate.

Kickstarter says that “staff pick badges were a user generated representation of being staff picked” and that “we did not create the badges.” It also claims that it did not permit projects that were not selected to show the badge.

According to Hack A Day, projects with a Staff Pick badge saw up to 30 percent more success than those without it, as it created a sense of trust and endorsement. How to get selected was opaque, and highly coveted.

The reality was, however, that Kickstarter said “staff pick badges aren’t part of our system.”

Today, the company has renamed the ‘staff picks’ program to ‘projects we love’ and added an official badge on projects that have been highlighted to help clear the air in the future.

Kickstarter also sent out an email to those that had been previously selected, saying that ‘staff picks’ branding should be removed and that the company will now add the badge automatically if selected:

Congrats again on being a Staff Pick! We’re writing to let you know that we’ve made a few changes to the way we refer to Staff Picks on Kickstarter:

Nothing else has changed, but if you’ve added any badges that mention that you’re a “Staff Pick”, you might want to remove them. Thanks and keep up the great work!

The Team at Kickstarter 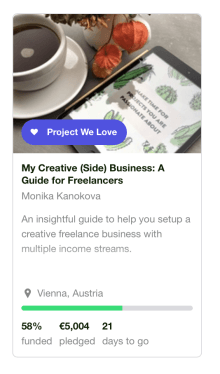 The badge, which is purple with a heart, now appears on both the campaign page and listings to show that it’s something the Kickstarter team has officially highlighted.

It’s a good improvement, as it was often hard to tell if Kickstarter had really endorsed a project, or if it was just the project claiming the company had.

What’ll be telling, is if Kickstarter will enforce the new badge system to ensure that campaigns that don’t get selected don’t use the branding.

We’ve reached out to Kickstarter for comment on the changes and will update if we hear back.